Rory McIlroy targeted a fast start to his third round of the Masters to erase the memory of a costly stroke of bad luck on day two at Augusta National, but Shane Lowry's tournament looks over.

McIlroy added a 73 to his opening 72 after his approach to the 18th clattered into the pin and rebounded 20 yards off the green.

The four-time major winner, who needs to win the Masters to complete the career grand slam, hit a superb pitch to three feet but missed the par putt to leave himself five shots off the clubhouse lead on one over par.

Watch the highlights from the early afternoon play in the second round of #themasters. pic.twitter.com/TjwYepDVc7

Charley Hoffman shot a 75 to lose his outright lead and instead he shares the honour with Sergio Garcia, Thomas Pieters and Rickie Fowler on four-under.

"It looked like it was going to be a tap-in birdie and I end up making five," McIlroy said. "It was two bad breaks because the wind then caught me out on the putt as well and made it go uphill.

"These things happen. I just have to birdie the first tomorrow and all will be forgotten. I'm disappointed to finish like that, but I'm still within five of the lead going into the weekend with better conditions on the way. I still feel like I'm right in this tournament. 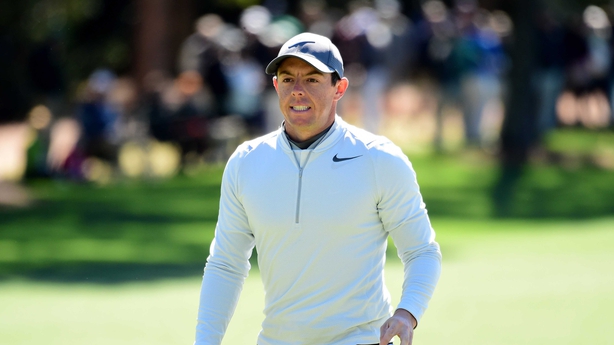 "Even just being in position going into Sunday, I know more than most what can happen on Sundays around here, good and bad. I've shot 66 in the last round and I shot 80 (in 2011 when starting with a four-shot lead)."

McIlroy was second at the halfway stage 12 months ago before seeing his challenge falter with a 77 on Saturday, but he added: "Last year I was more in defence mode rather than attack.

"It's a completely different mindset going out there to make birdies rather than not to make bogey."

McIlroy has played just 16 competitive rounds in 2017 after being sidelined for seven weeks with a rib injury, but believes he is more than capable of producing the low score he needs.

"In those 16 competitive rounds I've shot a couple of 65s and I shot a few good numbers, so it's right there," he added.

"Obviously, it's easier said than done around this golf course, but when you take advantage of the par fives, pick up a few others, there's something in the mid-60s, and it would be a great score to go into Sunday with."

Lowry simply never got going with six bogeys in his first nine holes. A double-bogey at 10 added to the misery and while he made birdie at 13, he missed the cut by a single shot.