Spain's Jon Rahm stormed into the semi-finals of the WGC-Dell Technologies Match Play with a 7&5 victory over Soren Kjeldsen.

After beating American Charles Howell III 6&4 in their last-16 clash on Saturday morning, Rahm thrashed the Dane in the quarter-finals to book his place in the last four.

The 22-year-old, who was the world's top ranked amateur while studying at Arizona State University, is currently 25th in the world after winning his first PGA Tour title in the Farmers Insurance Open at Torrey Pines in January.

And he could rise as high as 10th in the standings with victory in his just his second World Golf Championships event, having finished tied third in the WGC-Mexico Championship earlier this month.

Rahm has not trailed at any point in his five matches this week at Austin Country Club and was three up on Kjeldsen after six holes, aided by an eagle on the par-five sixth.

A par was good enough to win the eighth and birdies on the 10th and 12th helped Rahm seal another emphatic victory in the €9million event.

Rahm, who will face Bill Haas in Sunday's semi-final after the American beat compatriot Phil Mickelson 2&1, told PGA Tour Live: "The only thing I could have done better is maybe make that putt on 11 and that's about it.

"There's not many rounds of golf where a player looks back and says I cannot play any better and today was one of those. Last time I said that was Torrey Pines. Today it was the exact same way. I did a really good job."

By joining the European Tour on 1 March as an affiliate member, Rahm is eligible to earn Ryder Cup points when qualifying begins on 31 August.

Mickelson had never trailed in any of his first four matches and led for 54 of the 57 holes he had played, while Haas had to hole a 40-yard pitch to stay alive in his group 11 play-off with KT Kim before winning on the sixth hole.

However, it was Haas who birdied the opening hole to take an early lead and the former FedEx Cup champion was three up at the turn before Mickelson won the 10th and 12th to get back to one down.

Haas birdied the 15th to double his advantage and crucially matched Mickelson's birdie on the 16th after the left-hander missed from eight feet for an eagle. 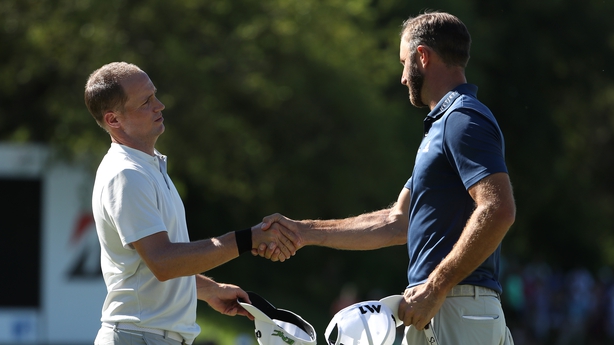 In the other half of the draw, world No.1 Dustin Johnson overcame spirited resistance from Sweden's Alex Noren to remain on course to become the first player to win all four WGC titles.

Johnson won the first three holes against Noren and was still ahead by the same margin at the turn, only to bogey the 10th and 11th and lose the next to a birdie.

However, the US Open champion - who is seeking a third straight tournament victory - bounced back to birdie the 13th, 15th and 16th to complete a hard-fought 3&2 win.