An emotional Jason Day abruptly pulled out of his opening match at the WGC-Dell Match Play to be with his mother, who has been diagnosed with lung cancer and is having surgery on Friday.

"Hard to comprehend being on the golf course right now, with what she's going through," said a tearful Day, who struggled to maintain his composure as he met with reporters after conceding his match at the Austin Country Club.

Day, who was three down to Pat Perez after six holes when he conceded, did not say how long he would be away from the game or whether he would be at the Masters.

"As of now, I am going to be back with my mom," said Day, who had tears streaming down his face. "It's been a very, very hard time for me to be even thinking about playing golf."

Day, 29, said his mother, Adenil "Dening" Day, was given 12 months to live at the start of the year after being diagnosed in Australia. She is in the United States for treatment, and the golfer said the prognosis appears to be better.

Day lost his father, Alvyn, to cancer when he was just 12 years old.

"I've already gone through it once with my dad," the Australian said. "And I know how it feels. And it's hard enough to see another one go through it, as well.

In the first day's second-to-last game, Sergio Garcia salvaged half a point against Ireland's Shane Lowry.

Garcia was two up after five holes but lost four of the next five before stopping the rot by winning the 12th with a par five.

Lowry maintained his lead until the final hole, but found trouble off the tee and three-putted from long range after Garcia failed with his birdie attempt.

Earlier in the day World number two Rory McIlroy was left with an uphill battle to regain Match Play title after losing to Soren Kjeldsen in their opening group match.

McIlroy looked to be on course for victory when he overturned a two-hole deficit with three birdies in a row from the 11th, only for Kjeldsen to birdie the next four holes to complete a superb 2&1 success. 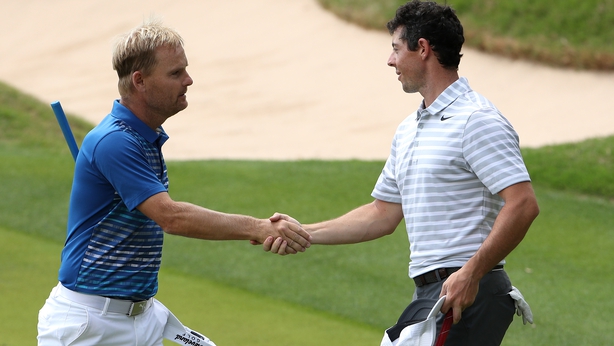 And the bad news for pre-tournament favourite McIlroy was that only one player who lost their first game 12 months ago - current world number one Dustin Johnson - went on to reach the last 16.

In a high-quality contest, four of the first five holes changed hands due to birdies before Kjeldsen edged ahead at the turn thanks to McIlroy's bogey on the ninth.

Another birdie on the 10th took the 41-year-old Dane two up, but 2015 champion McIlroy got back on level terms with birdies on the 11th and 12th, the latter aided by a drive measured at 410 yards - albeit with the assistance of the wind, slope and a cart path.

McIlroy almost drove the green on the short par-four 13th to set up another birdie and move in front, but Kjeldsen birdied the 14th to get back to all square and the European pair halved the next with birdies as well.

That's one way to close out a match.

Soren Kjeldsen beats Rory McIlroy for his first ever win at the @DellMatchPlay. pic.twitter.com/vyeErfSeS7

Kjeldsen, who had never previously won a match in the tournament, then closed out the win with brilliant approaches to the 16th and 17th to leave McIlroy needing two wins - and help from elsewhere - to avoid a shock early exit.

In the other match in McIlroy's group, the man he beat in the 2015 final, American Gary Woodland, defeated Emiliano Grillo 3&2.

Group matches are played on Wednesday, Thursday and Friday, with the winner of each group advancing to the last 16 on Saturday morning. The quarter-finals take place on Saturday afternoon, with the semi-finals and final held on Sunday.