Rory McIlroy enjoyed a solid start on his return to competitive action in the WGC-Mexico Championship and sits just one shot behind six players tied for top spot.

McIlroy has played just once in 2017 due to a rib injury which saw him push through the pain barrier before losing to Graeme Storm in a play-off for the South African Open in January.

The 27-year-old still arrived at Chapultepec Golf Club knowing that he could reclaim top spot in the world rankings for the first time since August 2015 by winning his third World Golf Championship title, as long as current number one Dustin Johnson finished joint fourth or worse.

And McIlroy was in the ideal place to keep an eye on Johnson's progress over the first two days after being paired with the US Open champion and Japan's Hideki Matsuyama.

Look who just made eagle ... 👀@McIlroyRory is now T4 and 2 back. #QuickHits pic.twitter.com/MfRiWcm6ST

Starting on the back nine of a course which reaches a maximum of 7,800 feet above sea level, McIlroy holed from 15 feet for birdie on the par-five 11th and added seven pars in succession to reach the turn in 35.

The four-time major winner then drove into a greenside bunker on the short par-four first hole and got up and down for birdie to reach two under par, while Johnson ran up a double bogey after hitting his tee shot out of bounds.

The County Down man dropped his first shot of the day by three-putting the fifth from long range, but produced the ideal response by holing from 30 feet for an eagle on the par-five sixth.

Forty-nine of the world's top 50 are in the 77-man field, with world number two Jason Day absent due to illness.

McIlroy was also reported to be under the weather but still signed for a 68. 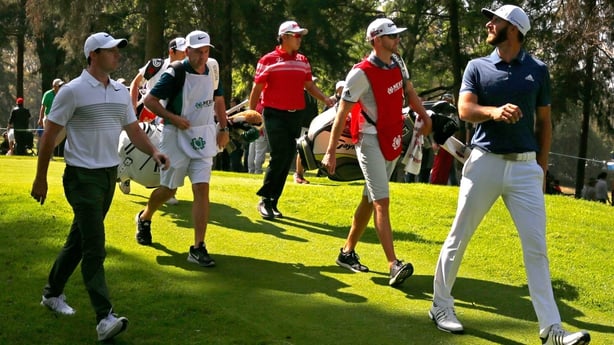 "The rib is fine, it's great actually," McIlroy said in an interview broadcast on Sky Sports.

"How I've responded the last couple of weeks, ramping up the practice and then playing my first full competitive round today, I didn't feel it at all so all positive in that regard.

"I probably could have played the Honda (Classic) last week but I wasn't going to know how my body was going to react playing four days in a row.

"I'm taking next week off to see how everything reacts and responds so it was the logical place to come back. I stayed patient and the week longer will definitely pay off."