South Africa's Haydn Porteous believes he has emerged from "a dark place" after claiming a share of the lead after the opening round of the Tshwane Open.

Porteous carded an opening 65 at Pretoria Country Club to join Sweden's Alexander Bjork and France's Gregory Havret on six under par, with the top 65 separated by just five shots on a congested leaderboard.

The 22-year-old qualified for the Open Championship last year by winning the Joburg Open and went on to finish 30th at Royal Troon, but he made just one more cut during the rest of the season and began his 2017 campaign with six missed cuts in a row.

Porteous stopped the rot in Malaysia and was 23rd in the defence of his Joburg Open title last week, results which suggest he is finally reaping the benefits of swing changes aimed at becoming more consistent. 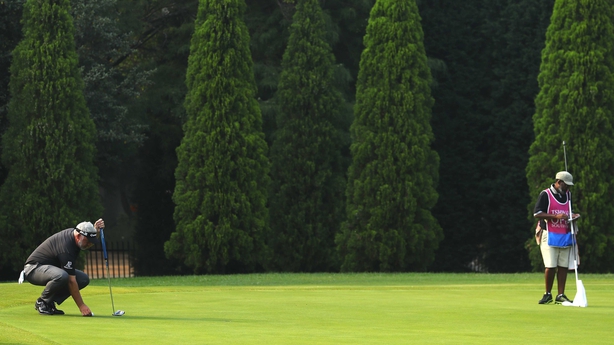 Wicklow’s Paul Dunne is two over par after a round of 73, while Darren Clarke is one shot further back.

"It's something that I have been really searching for for the last few months," Porteous said after six birdies and no bogeys in a flawless round. "I was in a dark place with my golf.

"To come back in my home country and in my home province and start to find my golf swing and really start to get some good scores under the belt is something I have really needed for a long time.

"And it feels good."

Havret, who was second to Graeme McDowell in the 2010 US Open and who has not won on the European Tour since 2008, raced to the turn in 29 before carding two bogeys and two birdies on the back nine.

"I'm obviously very pleased," the 40-year-old said. "I was pretty hot on the front nine. The back nine was a bit tougher and I didn't play that great, but I had a couple of good wedges on 14 and 17.

"They saved me a bit for that back nine.

"With eight birdies overall, my game was quite hot today."