Venezuela's Jhonattan Vegas moved into a share of the lead before severe weather forced the second round of the Genesis Open to be suspended.

The wind was so strong at Riviera Country Club that a eucalyptus tree near the 14th tee split and heavy rain also persuaded officials to suspend play for the day at 12.18pm local time in California.

The second round will resume at 7am on Saturday.

Pádraig Harrington, who began the day four shots off the overnight leader Sam Saunders, never got to the first tee, though it was contrasting days for the other two Irish golfers in action.

Shane Lowry had a disappointing outing and dropped five shots before the suspension of play saw him end his round at the 16th hole and he now sits at six-over-par.

Graeme McDowell picked up birdies at 11, 15 and 16 to finish on one-under-par for the round and minus three for the tournament

Vegas, who has two PGA Tour titles to his name, was three under through 14 holes when the horn sounded to join overnight leader  Saunders on seven under par. Saunders was among those not to hit a shot on Friday.

Having birdied the first from eight feet, Vegas converted from 15 feet at the fifth and nine feet at the sixth for further gains before taking the outright lead when he holed an 18-footer on the ninth to turn in 31.

However, a wayward drive on the 11th saw him drop his first shot of the day and he was yet to register a back-nine birdie after five holes.

American Jason Kokrak was two under through 10 holes to move into outright third on six under, while Dustin Johnson - who improved his chances of displacing Jason Day as world number one no harm with an opening 66 on Thursday - did not get to tee off before the weather intervened. 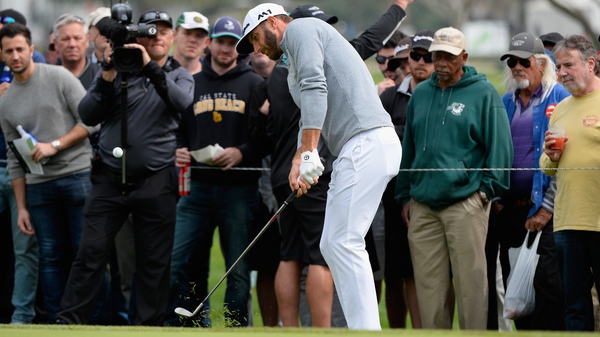