Tiger Woods had mixed fortunes as he began his long-awaited comeback at the Hero World Challenge in the Bahamas.

The 14-time major winner got off to a superb start with four birdies in the opening eight holes of his first competitive round in 15 months.

That briefly gave him a share of the lead in the elite 18-man event on New Providence, but the 40-year-old ultimately had to settle for a one-over-par 73 after slipping up on his remaining holes.

His final card contained four sixes, with double bogeys on the 16th and 18th costing him par and proving particularly disappointing.

Nevertheless, there were reasons for optimism with the former world number one, now ranked 898, showing no obvious signs of discomfort following his long lay-off.

You know you're a good putter when you fist pump before it's in. pic.twitter.com/ViqYb1GGBB

JB Holmes ended the first day with a one-shot lead after shooting an eight-under-par 64 at the Albany course.

Hideki Matsuyama was a shot further back on seven under, with Dustin Johnson on six under. Henrik Stenson, Matt Kuchar and Louis Oosthuizen were tied for fourth on five under.

Most of the focus was on Woods, with his return to action much hyped after previous plans to play at the Safeway Open and Turkish Open in recent months were abandoned.

Woods has had two back operations since last playing in August 2015 and, after such a long absence and the injury problems prior to that, he looked nervous at the first tee.

He subsequently missed the the fairway, but soon settled and collected his first birdie at the par-five third after setting up the opportunity with a superb chip on to the green.

That allayed some fears over his short game and he remained steady until picking up the pace with a run of three successive birdies from the sixth.

At that point he was tied for lead at four under, but he found only heavy rough from the ninth tee and then mis-hit a chip to the green, dropping him back to three under.

After that he struggled for consistency. He overhit two bunker shots on the 14th and only saved par by holing a putt from off the green. He birdied the 15th after narrowly missing a putt for eagle, but he found sand and bushes on the 16th and water off the 18th tee to take the gloss off his day. 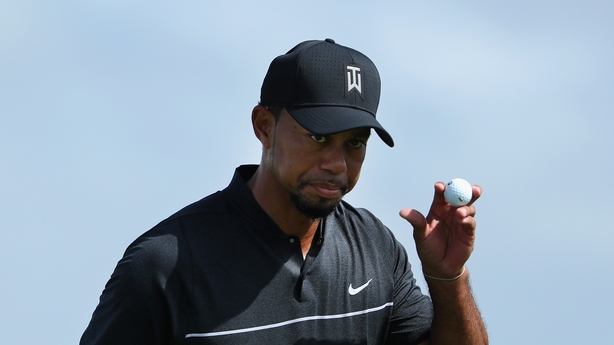 He said on Sky Sports: "If you think about it I hit the ball in three bushes and a water ball today, so it could have been something really good.

"I got off to a nice solid start but then made a few mistakes. I didn't play the par five well in the middle of the round.

"I had some awkward shots. If you drive great you can take advantage of this golf course, but if you don't you can end up in bushes or rocks and go sideways.

"But all in all I feel good and I am looking forward to another three days."

Olympic champion Justin Rose, back in action after a seven-week break, was last after shooting two over.