Tyrrell Hatton looked set to win his second tournament in the space of seven weeks after holing a bunker shot for par on the 17th to preserve a one-shot lead at Jumeirah Golf Estates.

However, the 25-year-old then drove into the creek which runs the length of the par-five 18th and carded his only bogey of a closing 68 to open the door for Fitzpatrick in the group behind.

The 22-year-old from Sheffield needed par to force a play-off or a birdie to win and duly got up and down from a greenside bunker to claim his third European Tour victory, a second win of the season and the first prize of more than £1million.

"It means the world," the Ryder Cup player said after becoming the youngest Englishman to win three times on the European Tour, eclipsing the record of six-time major winner Nick Faldo.

"To win one of these Final Series events is really special. Words can't describe it. It's not going to sink in for a while. It's been a special year and then to end it like this with a win is amazing. 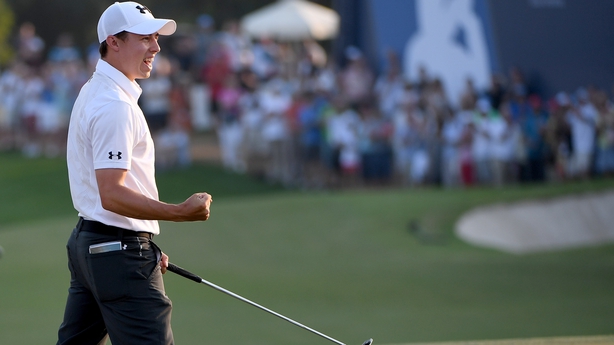 "It's two years to the day I got my card at the qualifying school. When you think about it, it's crazy. It's all happened so fast. Now I feel this win gives me the confidence to push further and further and see what we can do next season."

Stenson began the week 299,675 points ahead of Danny Willett and made certain of ending the year as European number one with a closing 65 matched by playing partner and defending champion Rory McIlroy.

That left the Ryder Cup team-mates in a share of ninth place, with Willett tied for 50th in the 60-man field after a closing 70. Sweden's Alex Noren, who was the other player capable of ending the season on top of the money list, was joint 23rd.

"I'm very pleased to get my name on this trophy once again," said Stenson, who was the first man to win the Race to Dubai and FedEx Cup in the same season in 2013.

"It's been a great year, the best year of my career.

"I've always thought it was going to be hard to top 2013, but I think I've done that. Maybe not to the level of golf over six months, but certainly with the highlights of winning the Open, the Olympics (silver medal) and managing to win the Race to Dubai again."

McIlroy was left to rue an opening 75, his only over-par score in the tournament's history, as he missed out on a fourth win of the season.

"If I had just shot something around level par, one under, I would have been right in the tournament," the world number two said.

"But these things happen and I played well for the remaining three days and at least redeemed myself a little bit."

Shane Lowry shot a second consecutive 69 to tie for 19th on nine under, while Padraig Harrington finished on three under following a third 71.