Rory McIlroy spluttered in his charge for the Shanghai victory he feels will be necessary to have a chance of winning the Race to Dubai for the third year running.

McIlroy said on Wednesday that he needs at least one win from his next three events to become only the second man after Henrik Stenson to win the FedEx Cup and Race to Dubai in the same season.

McIlroy is more than a million points behind Masters champion Danny Willett, who has a lead of more than 400,000 points over British Open champion Henrik Stenson, with Willett battling back from a nightmare start to card an opening two-over-par 74.

The world No 3 went round in a one-under-par 71 at the World Golf Championships-HSBC Champions in China today, to sit seven shots off the pace set by an on-fire Rikard Karlberg.

Three bogeys and a double bogey in the space of four holes took Willett to the turn in 41, but birdies on the second, third and ninth repaired some of the damage for the world number nine.

When you're Rory McIlroy ...

Sometimes you have to run after your tee shots. They're pretty far away. pic.twitter.com/MzZORaQZkT

McIlroy also started on the 10th and ended a run of six straight pars with a birdie on the 16th, although even that was something of a disappointment after driving the green on the short par four and missing from eight feet for an eagle.

And there was worse to come on the par-five 18th as the four-time major winner pushed his approach into the water surrounding the green, the resulting bogey dropping him back to level par.

A frustrated McIlroy finally got back into red figures with just his second birdie of the day on the seventh and parred the last two holes to sign for an opening 71.

That left the 27-year-old seven shots behind leader Karlberg, who had reached nine under with birdies on the 14th and 16th before dropping his only shot of the day on the par-five 18th.

The resulting 64 left Karlberg a shot ahead of Fowler, with Knox and Berger joined on six under by Japan's Hideki Matsuyama, who had 10 birdies and four bogeys in his 66. 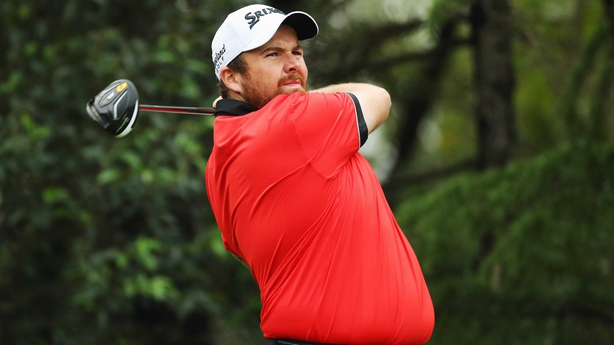 Shane Lowry shot four bogeys on a difficult first day, snatching a birdie back on 16 to get in the clubhouse two-over.

The Offaly man had been targeting a strong showing after a mixed year in which he just missed out on winning the US Open but also failed to make Darren Clarke's Ryder Cup team, but the Offaly man struggled to find his rhythm.

Scotland's Russell Knox made a superb start to the defence of his title.

Knox was 20 under par in winning his first European Tour title last year and carried on where he left off on Thursday as he attempts to become only the second player after Tiger Woods to retain a World Golf Championships title.

The 31-year-old carded a bogey-free 66 at Sheshan International to finish six under par, a shot behind playing partner Rickie Fowler and Sweden's Rikard Karlberg, who had five holes to play.

The group of Knox, Fowler and Paul Casey were a combined 18 under par, Casey carding a 67 which featured four birdies, an eagle and the group's only bogey of the day on the 11th.

After starting on the back nine, Knox followed four straight pars with the same number of birdies in succession from the 14th, before picking up further shots on the third and seventh.

Fowler had covered the back nine in 31 and completed a flawless 65 with birdies on the second and ninth, the latter edging him ahead of Knox and compatriot Daniel Berger.