Dustin Johnson recovered from a nightmare start to retain a share of the lead on seven under at the Canadian Open in Ontario.

Johnson had two bogeys and a double bogey in his first four holes as he made a poor start at Glen Abbey but recovered with birdies at seven and nine to turn in 39.

He faired better on the back nine with a further four birdies but another bogey on the 17th hole cost him the outright lead as he signed for a one-under round of 71 and a tie at the top of the leaderboard with Luke List.

"I really don't know what happened the first four holes," Johnson told reporters. "Just got off to a bad start. Hit it in a couple awkward spots. Made some bad bogeys, but fought back and turned it around and felt like I played really nicely from 14 on in.

List also shot 71 and finished strongly with two birdies in his last three holes but his round was blemished by a run of three bogeys in four holes early on the back nine.

Canadian amateur Jared du Toit, Jon Rahm and Kelly Kraft are a stroke behind the leading pair on six under.

Du Toit held a share of the lead when he turned but a triple-bogey eight on his 11th hole set him back before three late birdies pulled him back up the leaderboard.

Graeme McDowell missed the cut following a 76 which left him seven over. 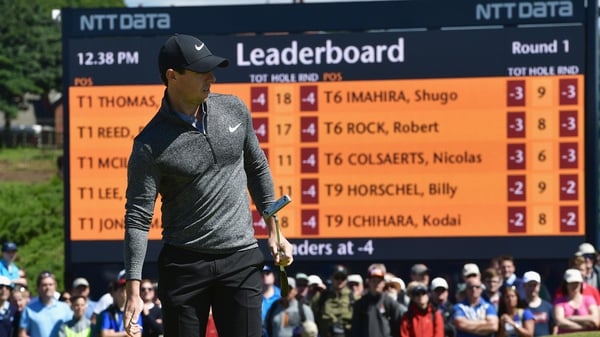