Thailand's Thongchai Jaidee produced a masterclass in frontrunning to win the French Open and claim his eighth European Tour title as a frustrated Rory McIlroy failed to mount a challenge in Paris.

Jaidee began the day with a two-shot lead over McIlroy and Wang Jeunghun, and never looked in danger of being caught thanks to a closing 68 at Le Golf National, venue for the 2018 Ryder Cup.

The 46-year-old former paratrooper carded four birdies and a solitary bogey on the 18th, his first dropped shot since the 14th hole of his second round, to claim a fourth win - all of them in Europe - since turning 40.

At 11 under par, Jaidee finished four shots clear of Italy's Francesco Molinari, whose 66 was the lowest round of the day, with McIlroy another stroke back after a 71 containing one birdie, one bogey and 16 pars.

Spain's Rafael Cabrera-Bello boosted his chances of a Ryder Cup debut in September after a closing 67 left him in outright fourth, but Andy Sullivan's hopes of making the European team were dented by a costly finish.

Sullivan had looked set to claim second place when he carded four birdies in five holes from the 12th to reach eight under, only to bogey the 17th and run up a triple-bogey seven on the last to drop into a tie for fifth with former champion Martin Kaymer and South Africa's Brandon Stone. 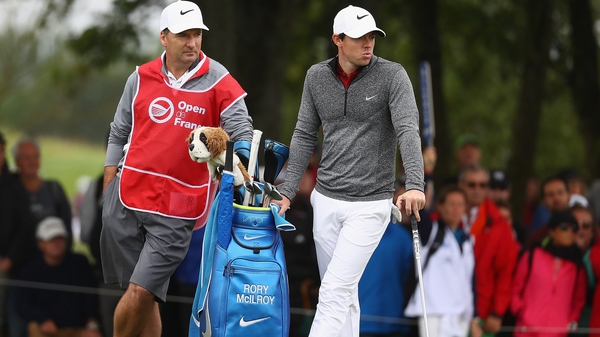 Rory McIlroy surges into share of lead at the French Open