Shane Lowry saw a four-stroke lead evaporate as Dustin Johnson claimed the US Open title on a day of controversy at Oakmont.

Johnson carded a closing 69 to finish four under par, but only after belatedly being given a one-shot penalty following an incident which left players, officials and spectators unsure of his score with just seven holes to play.

The world number six began the final round four shots behind Lowry, but moved two clear of the field with birdies on the second and ninth coupled with four bogeys in the first 10 holes from Lowry.

However, the 31-year-old was then told on the 12th tee that officials would be reviewing an incident on the fifth hole, bringing back memories of his nightmare finish to the 2010 US PGA when a two-shot penalty for grounding his club in a bunker on the 72nd hole cost him a place in the play-off.

Johnson had seen his ball move fractionally as he lined up a par putt, but called in the referee walking with his group and was initially cleared of any wrongdoing before holing out for par.

The news that Johnson had been informed of the post-round review was widely criticised, with four-time major winner Rory McIlroy writing on Twitter: "This is ridiculous... No penalty whatsoever for DJ. Let the guy play without this crap in his head. Amateur hour from @USGA."

And defending champion Jordan Spieth added: "Lemme get this straight.. DJ doesn't address it. It's ruled that he didn't cause it to move. Now you tell him he may have? Now? This a joke?"

Double US Open champion Curtis Strange, commentating for Fox Sports, added: "What other sport do you wait until the end to make the ruling? This is ridiculous in my opinion."

Johnson was eventually given a one-shot penalty but still finished three shots clear of Lowry - who struggled to a disappointing 76 - Scott Piercy and former champion Jim Furyk. 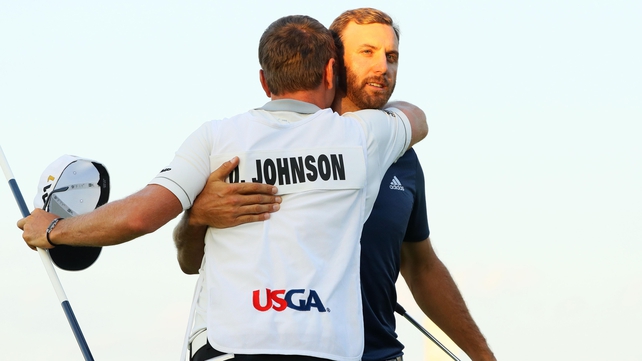 Sergio Garcia finished a shot further back alongside South Africa's Branden Grace after carding three birdies in succession from the 14th.

Johnson, who three-putted the 72nd hole at Chambers Bay last year to finish a shot behind Jordan Spieth, had got on level terms with a birdie on the ninth and found himself in the outright lead when Lowry bogeyed the same hole after finding sand off the tee.

He then enjoyed an enormous stroke of luck when he pulled his drive on the 10th into thick rough, but was allowed to take a free drop into the first cut due to a television tower being between him and the green.

Lowry's three-putt bogey on the 10th left Johnson two shots clear, but amid the confusion over the possible penalty, Lowry reduced the deficit with a tap-in birdie on the 12th.

Johnson three-putted the 14th to drop back into - for the time being at least - a tie with Lowry, only for the Offaly man to do exactly the same in the group behind and then make the same mistake on the 15th and 16th as well.

With Piercy dropping a shot on the 18th, Johnson had a vital three-shot cushion but made absolutely certain thanks to a stunning approach to the 18th and holing from five feet for birdie.