Matt Fitzpatrick admitted he was "a million miles" ahead of schedule after claiming his second European Tour title in the Nordea Masters to boost his chances of a Ryder Cup debut in September.

The 21-year-old from Sheffield carded a closing 71 at Bro Hof Slott Golf Club to finish three shots ahead of Denmark's Lasse Jensen, who secured his place in the Open Championship with the best finish of his career.

And the first prize of 250,000 euros saw Fitzpatrick move within 500,000 euros of the total which secured Jamie Donaldson the final automatic Ryder Cup qualifying place for Gleneagles in 2014.

"It's something I'm trying to play down a little bit," said Fitzpatrick, who finished seventh in the Masters at Augusta in April. "I'm really trying to play each week as it comes and there's still a long way to go before then, there are still three majors and anyone can win them.

"Hopefully I'll keep playing well and see where we end up come September."

Asked if he had achieved more than expected following his maiden win at the British Masters last year, Fitzpatrick added on Sky Sports: "Completely a million miles ahead of schedule.

"It's been a tough few weeks to be fair. After the Masters I had three missed cuts in a row and didn't play as well as I'd like last week (in the BMW PGA Championship) and all of a sudden you turn up this week and pick up a win.

"I felt like today was the round where I'd been under the most pressure but hitting fairways and greens was key. I think I missed two all day and had a three-putt so I'm absolutely delighted with that and played fantastic. I think this is the best I've played."

Colsaerts also birdied the 10th from 30 feet and when Fitzpatrick three-putted the same hole from long range his lead was down to two, but Colsaerts then bogeyed the par-five 12th before Fitzpatrick birdied to restore a four-shot lead he was never in danger of relinquishing.

Jensen, who had earlier holed out from 152 yards for an eagle on the sixth, chipped in for another on the 13th and inherited second place as Colsaerts span his tee shot back into the water on the 17th to double bogey.

A disappointing day for the Irish saw Michael Hoey finish three over following a 77, while Peter Lawrie carded a final round of 78 for four over total. 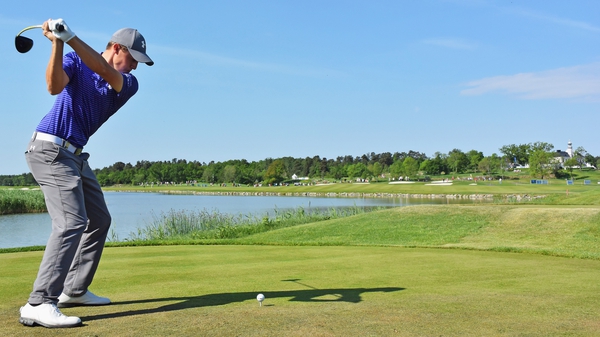