Padraig Harrington bogeyed his last two holes at Walton Heath to miss out on a place at next month's US Open.

The Irish three-time major winner, announced last week as one of Darren Clarke's vice-captains for this year's Ryder Cup, slipped up late on to miss out on the deciding play-off by one shot.

He needed to finish in the top-13 at the international sectional qualifier but fell from the automatic qualifying mark of three under to not even making the five-man play-off for two places, as bogeys on the par-three 17th and par-four 18th left him one under overall.

Harrington had started in style with an eagle and two birdies on his front nine but shot bogeys on the ninth and 11th. A birdie on the par-five 13th got him back on track before disaster struck late on.

English pair Andrew Johnston and Lee Slattery were among the 13 players to win places after finishing behind French winner Gregory Bourdy.

Johnston delighted local crowds by clinching his spot in what will be his debut tournament in America, the 27-year-old continuing to ride the wave that brought him a maiden European Tour title in Spain last month and a top-10 finish in his home event, the BMW PGA Championship.

Slattery also qualified after two rounds of 69, the 37-year-old marking a return to the US Open having previously teed it up in 2012 at the Olympic Club, also the venue when Matthew Baldwin - another to win qualification - last appeared in the tournament.

Bourdy sealed a return to the US Open after finishing two shots clear of Sweden's Mikael Lundberg.

Four-time European Tour winner Bourdy had hinted at having rediscovered his best form with strong finishes in Ireland and at Wentworth in the last two weeks, and the 34-year-old followed a five-under-par 67 around the New Course in the morning with a four-under-par 68 around the Old Course to head the 13 players earning spots at Oakmont Country Club.

Lundberg, a three-time European Tour winner, will make his major Championship debut after finishing on seven-under-par overall in cold and blustery conditions in Surrey. 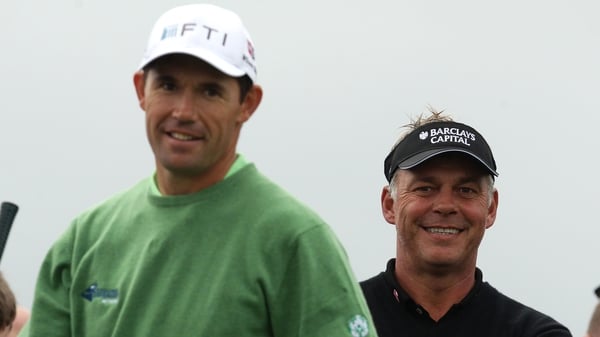 Harrington: Darren Clarke has the detail to go with emotion