Rory McIlroy has hailed his Dubai Duty Free Irish Open victory as “incredible” after a dramatic day at the K Club.

The tournament host produced stunning shots at 16 and 18 to hold off Russell Knox and seal a three-shot success to claim the title for the first time.

He said that the personal achievement was something he had always craved, but also lauded the knock-on effect it will have on The Rory Foundation which benefits a number of charities.

After his final putt, a normally-composed McIlroy showed plenty of emotion and revealed that it meant “an awful lot” to him.

"That's a shot that I'll remember for a long time" - @McIlroyRory on his stunning shot at 18. @DaveKelly4https://t.co/wJOjYM2YFj

He told RTÉ Sport: “The Irish Open is a tournament I have grown up dreaming of winning. Coming down to watch it as a kid, playing it as amateur, and now after not a great in the Irish Open, getting my hands on the trophy is incredible.

“And the way that I did it today, I had to dig so, so deep and hit some quality shots down the stretch. Thankfully, I was able to get it done.

“I think it was the fact that I had so many people supporting me this week but also that the people we can help this week because of what I have just done. Whatever the prize money is, it is going all to the foundation and the three charities that benefit from this week.

“With that win today, I think we have broken the €1million in terms of money for the foundation so it's a huge day for not just me in my golf career but also for the foundation. It's great to be able to give back and I don't think this week, in either golf or charity wise, could have went any better.”

He added that coping with the pressure of being a home favourite is something he is finally used to and helped him get over the line.

"I think at the start of my career I probably found it a little bit of a burden. But I have begun to relish it and understand the positives behind it. To win in that fashion today in front of all those people, people that don't get to see me play golf very often these days, it's a dream come true."

The approaches to 16 and the final hole brought scenes of joy in Kildare - the shot at the 18th in particular was McIlroy at his best.

Asked where it ranks in his career, he concluded: "It's right up there. I'm not sure I have ever hit a shot like that from that distance, to basically seal a golf tournament.

"That's a shot that I'll remember for a long time and hopefully I have a few more left in me this year and this isn't the end. Hopefully this is the just start of it and I can go on and win a lot more tournaments and trophies from now until the end of the year." 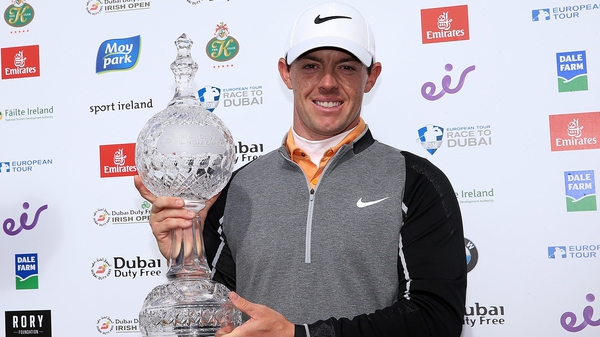