Sergio Garcia resumed his love affair with the AT&T Byron Nelson as he ended the opening day's play in a three-way tie for the lead, one shot ahead of Jordan Spieth and the chasing pack.

Garcia, who played his first professional round in the United States when he competed in the 1999 edition of this tournament before winning it in 2004, was tied with Danny Lee and Johnson Wagner on seven under when darkness brought an early end to play following a two-and-a-half hour delay in the morning.

The leading trio had all completed their rounds, as had Spieth, Dustin Johnson and Freddie Jacobson, who were one shot back after rounds of 64. Tom Hoge was also at six under having made it as far as the 14th hole before darkness fell.

Garcia's round started slowly as he tackled the back nine first, with just a single birdie on the 15th. But after making the turn he was brilliant, carding four birdies and an eagle on the par-five seventh, needing just one putt on the final eight holes he played.

"Obviously it was a great round of golf," the Spaniard said on the PGA Tour website. "I felt like I played pretty solid but I would not say spectacular.

"I had a couple of really nice saves and got going on the back nine. I hit a couple of bombs there that really helped."

Spieth - coming off a missed cut at the Players Championship - had seven birdies, having chipped in from 23 feet on the first hole, but stumbled with a bogey on the par-three 13th, having missed a putt for par from seven feet. Spieth also missed an opportunity when he narrowly missed a long eagle-chance on the par-five 16th.

The 22-year-old is working to correct what is a surprisingly poor record on home soil in Texas, having failed to record a top-25 finish in the Byron Nelson since a tie for 16th as a 16-year-old amateur in 2010.

Ben Crane fired his first bogey-free round in 36 attempts to join a nine-way tie for eighth place, but last year's winner Steven Bowditch of Australia was well off the pace after mixing three bogeys, three birdies and an eagle into his round of 68, leaving him down in a share of 44th place. 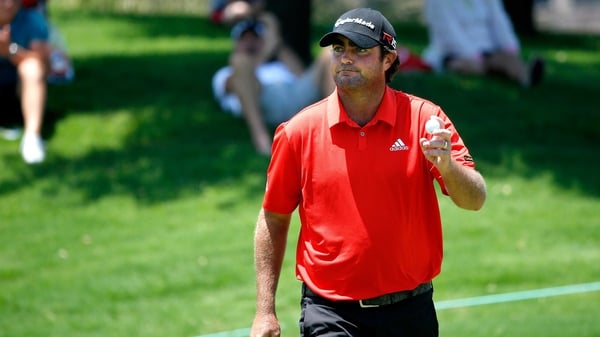