Rory McIlroy missed out on creating a piece of history in the Players Championship as Shane Lowry set the clubhouse target in the weather-affected second round at Sawgrass.

McIlroy carded seven birdies and an eagle in his first 16 holes on the Florida course and came to the par-five ninth, his final hole, needing a birdie to set a new course record of 62.

However, faced with a second shot from 271 yards, the four-time major winner surprisingly opted to lay up and then missed the green from 90 yards with his approach, before fluffing a chip and running up his only bogey of the day.

The resulting 64 left McIlroy three shots behind his potential Olympic team-mate Lowry, who added a 68 to his opening 65 to finish 11 under par, a shot ahead of Jonas Blixt, Alex Cejka and Cameron Tringale.

World number one Jason Day remained top of the leaderboard on 14 under but was unable to complete his round following a two-hour delay due to lightning in the area.

The US PGA Champion opting not to complete the 15th after play was eventually suspended due to darkness.

Lowry had started on the back nine and bogeyed 14 and birdied 16 before dumping his tee shot into the water on the 17th, but then holed out from 120 yards for only the sixth eagle in tournament history on the 18th.

Birdies on the second and third, either side of the delay, were followed by another on the fifth to leave the WGC-Bridgestone Invitational champion in contention for a second PGA Tour title. 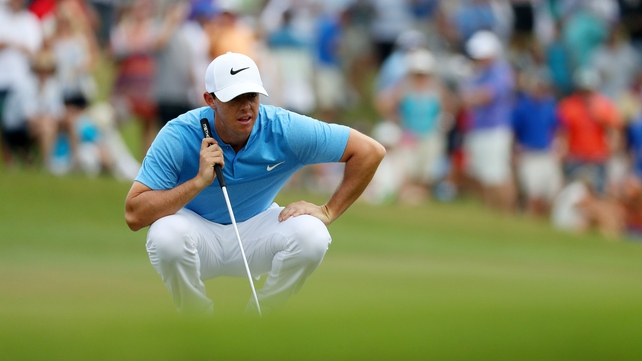 "I got off to a bit of a shaky start today, I didn't feel that comfortable and then we were called in," said Lowry.

"To go back out there and make a couple of birdies and finish the round nicely was good."

Lowry revealed on Thursday that his poor form had prompted an "emergency" call to his coach Neil Manchip before play began, while he also benefited from a putting tip from Graeme McDowell.

"In hindsight, with that pin being on the left side, anywhere on the right I probably had a chance to get up and down." - Rory McIlroy

"I was struggling to see the lines and he gave me a tip to stand a bit further from the ball and I've managed to hole a few putts the last couple of days, which is nice," Lowry added.

McIlroy (above) had earlier holed plenty of putts but never gave himself a chance to do so on the final hole after taking an unusually conservative approach.

"I've got it in my head with the ninth hole that any time that I have gone for the green it has not really worked out for me," he said. "I had a good number today and laid up with a nine iron.

"I probably had a two iron to the front of the green. In hindsight, with that pin being on the left side, anywhere on the right I probably had a chance to get up and down.

“I thought get it within 100 yards and take my chances from there and just didn't hit a great third shot and left myself in a difficult position."

American Colt Knost was a shot ahead of McIlroy after earlier also missing out on the course record, the world number 184 shooting 63 after three-putting the 18th from 40 feet.

Knost, who carded 10 birdies in 15 holes from the third, admitted nerves had contributed to missing his par putt on the 18th from four feet.

He said: "I hit a pretty good putt to be honest and it just lipped out on me.

"It was cool to be in the mix and knowing I could do something that no-one else has done but we have two more days to do that." 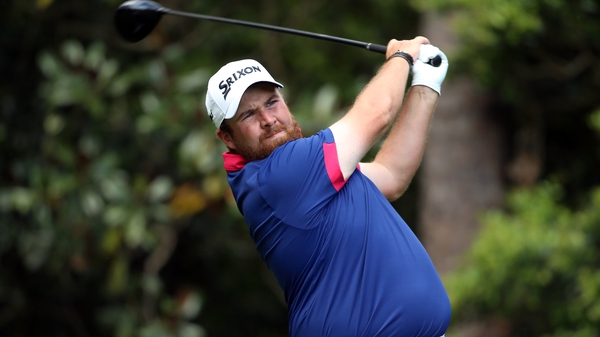