Defending champion Rory McIlroy recovered from a poor start to keep his hopes alive of a third victory in the Wells Fargo Championship in Charlotte.

McIlroy won his first PGA Tour title at Quail Hollow in 2010 and has recorded five top-10 finishes in six appearances in the event, including carding a course-record 61 in the third round last year on his way to a seven-shot win.

But the four-time major winner, who is the only member of the world's top five yet to win in 2016, had to settle for an opening 73 on Thursday to lie eight shots off the clubhouse lead held by Steve Wheatcroft and Andrew Loupe.

Starting on the back nine, McIlroy dropped shots at the 12th and 13th before carding a double bogey on the 18th, where he missed the green with his approach and three-putted from 13 feet following a clumsy chip.

A birdie from 20 feet on the second was followed by another dropped shot on the next, but McIlroy then two-putted the fifth for a birdie and picked up another shot from just four feet on the sixth.

The 27-year-old had come close to holing his tee shot on the par three despite a disturbance among the spectators, with McIlroy and playing partner Rickie Fowler appearing to point out the offender to security staff.

Another two-putt birdie on the par-five seventh made it three in a row and although McIlroy narrowly missed from 15 feet on the ninth to get back to level par, he at least had not played himself out of contention.

McIlroy has not played competitively since finishing 10th at the Masters and admitted on Wednesday he was attempting to fix some "bad habits" which had crept into his game before Augusta.

"I knew I was going to have to sort of play my way into the next couple of weeks," McIlroy said in quotes reported by the Golf Channel.

"I started off pretty well today but then there was just some shots where I was thinking so much about the swing rather than actually the shot that I was trying to hit and that was really the problem for the front nine.

"I would much rather be in red numbers [under par] but I'm much happier where I am now than I was three hours ago. I just need to go out tomorrow and shoot a good second round, something in the 60s, get myself back into the tournament going into the weekend."

At the top of the leaderboard, Wheatcroft carded two eagles, five birdies and two bogies in his seven under par round, while fellow American Loupe was more consistent with seven birdies.

India's Anirban Lahiri was on his own a shot further back, while the best British performer in the first round was Scotland's Martin Laird - who on three under was a shot clear of England's Justin Rose, Greg Owen, Paul Casey and Ian Poulter and Germany's Alex Cejka. 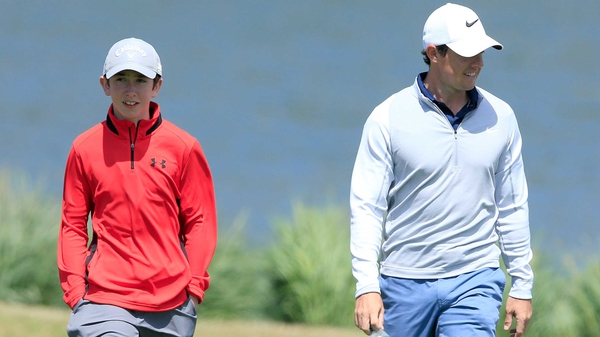