An ambitious Danny Willett can become the world number one and win another major title this year, according to his manager.

Willett, who will play at next month's Dubai Duty Free Irish Open at the K-Club, became only the second English player to win the Masters and the first European champion since 1999 following a dramatic final round at Augusta National on Sunday.

"At the end of the day Danny can become one of the greats of his time, and I would not be surprised if he is"

The 28-year-old carded a flawless closing 67 to capitalise on a shocking collapse from defending champion Jordan Spieth, who was five shots clear with nine holes to play before dropping shots on the 10th and 11th and recording a quadruple bogey on the 12th.

And Willett's manager, former European Tour player Andrew 'Chubby' Chandler, believes that his latest champion will not be content to settle for the sole major titles so far enjoyed by past or present stablemates Louis Oosthuizen, Charl Schwartzel and Darren Clarke.

"Danny thinks he can get to number one in the world," Chandler said. "He won't be distracted. He knows just exactly what he's trying to do. Winning the Masters is the start of the journey, not the end of the journey.

"Danny can to get to number one in the world without any doubt and I think he can win another major this year. The one thing about him is that his game is suited to all the courses.

"He knows exactly how many majors Rory (McIlroy) has won and he will want to get up there and past Rory's tally. If you take Tiger (Woods) out, what is the next best tally of majors among current players? Phil Mickeslon with five.

"No matter. At the end of the day Danny can become one of the greats of his time, and I would not be surprised if he is." 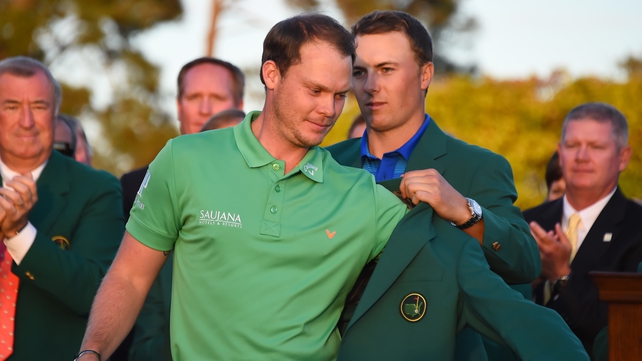 Willett was already ranked 19th in the world at the end of 2015, but Chandler revealed the lengths the former world amateur number one is prepared to go to in order to achieve success.

"Over Christmas he had his blood tested and he had his sweat tested just to get everything right," Chandler added. "You know when you have somebody that wants to be good.

"He had his trainer here (in Augusta) and he's got a terrible back, so once a month he has a check-up, and then he goes on and does his thing properly. He works so hard in the gym. Partly because of his back and because he wants to. So he will be here for long time.

"He lives his life unbelievably well and he deserves everything he gets. He doesn't use a psychologist as he said he talks to his dad (Steve, a Sheffield vicar) and that's what he does. He just does the right thing and he thinks if he does that, he is not going to go too far wrong."

Willett played in the final group in the third round of the Open last year before finishing sixth, while he also played in the 2007 Walker Cup which featured the likes of Great Britain and Ireland team-mate Rory McIlroy, as well as Rickie Fowler, Dustin Johnson and Billy Horschel on the victorious American team.

"He lost two years due to his back injury, but he had seen how everyone who player in that Walker Cup had gone on to play, so he knew he could also do well," Chandler added. "He's got as great a work ethic as anyone here this week.