Paul Dunne sank a nerve-jangling, downhill birdie putt on the final green to sit just four shots off the lead going into the final round of the Farmers Insurance Open.

The Greystones man posted his third consecutive under-par round in his first professional start on the PGA Tour with a one-under-par 71 on the South Course at Torrey Pines Golf Club.

Dunne endured a slow start with bogeys on the first and fourth hole but bounced back with birdies on the sixth and eighth holes to go out in level par.

Another bogey followed on the 11th before birdies on 13 and the aforementioned 18th sees Dunne sitting in a tie for 17th going into the final round.

Sunday’s finale will see the golfers out on the course in three-balls with an early start due to a local weather warning and perhaps the bad weather might suit the Irishman who would be no stranger to inclement conditions.

Shane Lowry shot a one-over-par 73 to sit on one under for the tournament and is currently in a tie for 40th place.

Scott Brown and KJ Choi lead the field on nine under par. 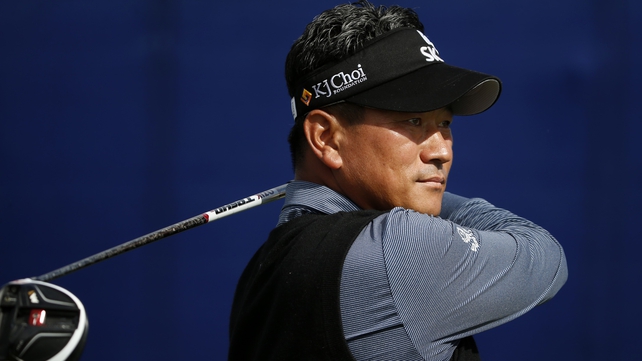 Twenty-three players are bunched within four shots on a packed leaderboard, with rain and strong winds forecast to lash the course in the final round on Sunday.

Choi (above) winless on the PGA Tour since 2011, was delighted to give himself a chance of ending his drought.

"This course is very important on the tee shot and second shot but more important is iron play," the 45-year-old told reporters.

"Today my greens in regulation was a little bit low, but my chipping was good and the putting was good."

Co-leader Brown recently became a father for the second time, but on Sunday will be focused on trying to secure his second tour victory.

"Any time you're close to the lead or in the lead, it's obviously pretty good feeling," he said.

"I've been driving it well for three days, really, and hopefully if I can continue that tomorrow, I'll be able to post another decent number. The weather's going to be brutal, so we'll just see how it goes."

Swede Jonas Blixt shot his second straight 66 to vault within two shots of the lead, an unlikely position after he opened with a 77.

Nobody has recovered from such a poor start to win the tournament.

"You don't get too many chances to win on this tour, and when you do, you really got to try to get it," said Blixt, the 2014 Masters runner-up with Jordan Spieth.