Paul Dunne fired a 68 on Saturday to lie just two shots off the lead at the Joburg Open.

The Greystones man carded a bogey-free round of 63 on Friday to move to nine under at the halfway stage, five off leader Ross McGowan, and he flew out of the traps again on the East Course at Royal Johannesburg and Kensington.

Dunne birdied four of his first nine holes to share the lead through 10, but a double-bogey on the 12th halted his momentum.

The 23-year-old sank back-to-back birdies on the 14th and 15th before dropping another shot on the par-four 17th, but another birdie on the 18th left him sitting pretty heading into Sunday.

Speaking after his round, Dunne said: "I went out thinking that if I shot something around four under that I’d have a chance to get into contention and I got off to a quick start.

“[It was] a help, it was kind of disappointing playing the rest of the course in level par.

“A lot can happen over 18 holes but it’s nice to be in with a chance. Hopefully, I can start off tomorrow like I did today and actually keep it going."

England's Anthony Wall earned a share of the lead with a flawless 68.

The Wanderers is down the road, Paul! Textbook checked cover drive from Dunne at 17. 🏏 pic.twitter.com/BlFSmoJ5Z2

The 40-year-old one-time winner on the European Tour had birdies on the fourth, ninth, 10th and 13th holes, and will head into Sunday's final round level on 15 under par along with South African pair Zander Lombard and Haydn Porteous.

Lombard had an even more eventful and productive day at the office. The Pretoria-based player, who turns 21 on Monday, posted nine birdies and two bogeys en route to a 65 on the East Course at Royal Johannesburg and Kensington Golf Club.

And Porteous, having started with an eagle at the par-five first, then ended his third round with two straight birdies to make it a three-way tie at the top after 54 holes.

We have a three-way tie at the top with 18 holes to come at the #JoburgOpen. pic.twitter.com/jqZVR4KCb5

Wall's only other career victory came at the Alfred Dunhill Championship in 2000, and he acknowledged his approach to the game has changed in the past 16 years.

"That's why I play golf now - to try and make my children proud of me, to try and win as many times as possible," he said on www.europeantour.com.

"At the end of the day I'm father now before I am a golfer. That switched a few years ago and I just want to keep playing for them and my wife so they can be proud of me." 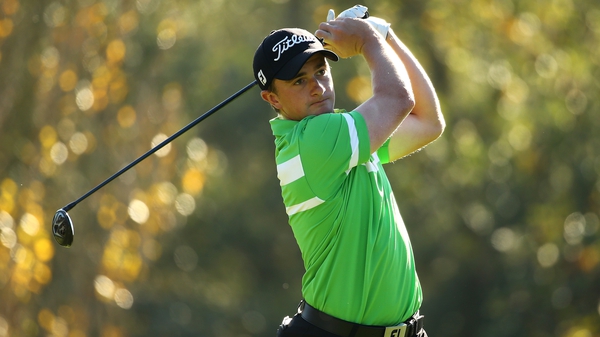