Graeme McDowell overcame a horrendous start to shoot 67 at the weather-interrupted opening round of the OHL Classic at Playa Del Carmen, Mexico.

The Northern Irishman pushed his opening tee shot out of bounds, then put his provisional on a similar line but stayed in play and scrambled to save double-bogey.

"I thought I was going to make about a 12 off the first, shake the lads' hands on the second tee and say, 'See you later,'" the former US Open champion told Golf Channel.

"Golf's a funny game. Sometimes some of your best rounds start off with a bogey or a double," he said.

Leonard, who had a bogey-free round at Mayakoba before wind and rain caused a 74-minute delay, shared the lead with Australian Aaron Baddeley, Shawn Stefani and Derek Fathauer.

"Golf's a funny game. Sometimes some of your best rounds start off with a bogey or a double"

The first round was suspended due to darkness with 21 players still on the course.

Leonard, 43, is planning to cut back on his playing schedule this season to spend more time with his family after moving with his wife and four young children from Dallas to Aspen, Colorado.

"We just moved to Colorado in August, and I want to just play the tournaments that I'm excited to go play and see what I can do," said 12-time PGA Tour winner Leonard, who won his only major at the 1997 Open.

Baddeley, a three-time winner on the Tour but who has lost his card, qualified for the event by finishing fourth at last week's Sanderson Farms Championship.

Stefani was runner-up at this event last year to Charley Hoffman. 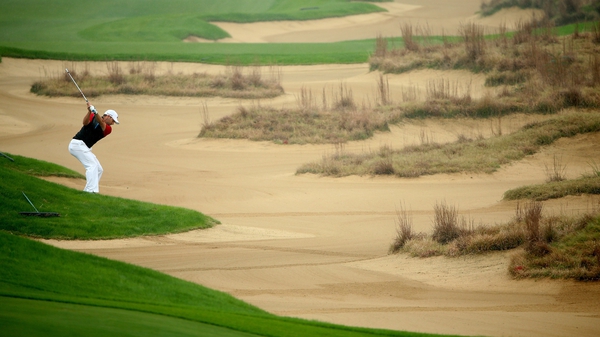