Lee Westwood believes something has "finally clicked" after shooting his lowest score for 14 months, although that was still not enough to claim the lead on the opening day of the Turkish Airlines Open.

Westwood carded eight birdies in a flawless 64, despite suffering from a heavy cold and only being one under for the five par fives at Montgomerie Maxx Royal, which South Africa's Jaco van Zyl played in six under in a stunning 61 to assume the lead in Antalya.

England's Chris Wood took his opportunity to impress playing partner and Ryder Cup captain Darren Clarke with a 66, while Race to Dubai leader Rory McIlroy is part of a seven-strong group a shot further back after a 67 which featured a chip in and a left-handed recovery shot. 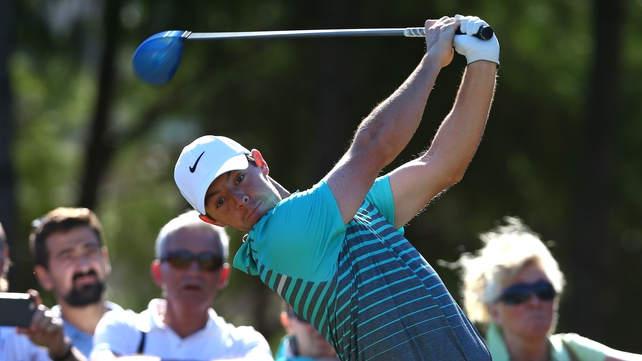 Westwood has given up his PGA Tour membership as he goes through a divorce from his wife of 16 years, Laurae, moving back to the UK from their home in Florida to be close to their two children.

The 42-year-old won the Indonesian Masters in April, but has slipped down the world rankings to his current position of 46th, with a place in the top 50 vital to secure entry to majors and World Golf Championship events next season.

"I've had an idea of what's been wrong for a while and I've been working hard with Mike Walker (his coach) and also with Kevin Duffy in the gym and I think something has finally clicked," the former world number one said.

"It's stuff I've worked on before, but just a slightly different idea to give myself the same feeling as I got when I was playing well.

"I'm no spring chicken any more. I've been training my hips to work in a certain way the last couple of years, but not playing very well and with not a great hip and leg action. I'm trying to train my way out of it now and get it back to where it was.

"I would have taken four under at the start but it's a bit disappointing. It was a pure lapse of concentration on eight and a sloppy tee shot on nine left me a lot of work to do" - Shane Lowry

"I have six big tournaments before the end of the year. I've dropped down the world rankings, so I want to earn as many points as I can to solidify my spot in the top 50 in the world. It's not been a completely disastrous year by any means but I want next year to obviously be better."

Van Zyl, who was granted a medical exemption for this season after undergoing knee surgery in 2014, put himself in pole position to claim a first European Tour title thanks to an eagle and nine birdies, five of them coming in the last six holes.

"I honestly thought four under par around here was a good score," the 36-year-old said. "I got it going early in the round and just kept it going. It was really good fun.

"I've been hitting it really nicely for months now. Been really struggling on the short game, putting in particular. I put a little bit more effort and time into it this week and I think I've found the key."

McIlroy has a lead of 271,214 points over England's Danny Willett - who carded a 69 - as he looks to win the Race to Dubai for the third time in four years, but cannot afford to relax with each of the four Final Series events worth more than 1.3million points to the winner.

The 26-year-old is playing three of the four and has targeted at least one victory to end an injury-affected season in style, his last win coming six weeks before suffering the ankle injury which ruled him out of the Scottish Open and the defence of his Open and WGC-Bridgestone Invitational titles.

After starting from the tenth, McIlroy chipped in for a birdie on the par-five 11th and then made a crucial par save after a poor drive on the 18th, turning his sand wedge around to play a left-handed pitch back on to the fairway from the base of a tree.

"I feel like my game came together a lot more on the back nine," McIlroy said. "I was trying to find my rhythm for the first few holes and made a good par save on 18 which gave me some momentum going into the back nine, so overall I'm pretty pleased.

"I had a few putts that just missed due to maybe lacking a little bit of pace, but for the most part I felt like my putting was a lot better than it has been.

"It would be nice to go to Dubai with another win under my belt, whether it's this week or in China next week. I feel like I've set myself up for a good three days to have a run at it this week." 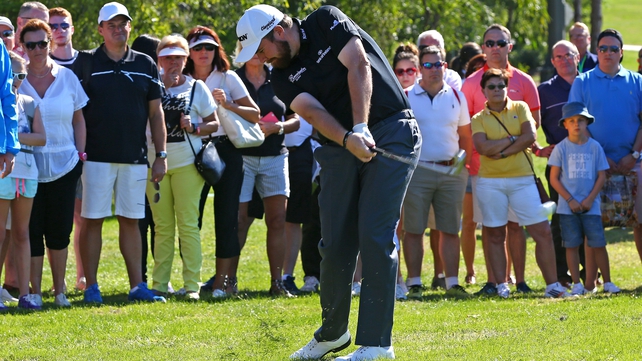 Shane Lowry had to settle for a 68 after dropping shots on the eighth and ninth.

"I would have taken four under at the start but it's a bit disappointing," Lowry said. "It was a pure lapse of concentration on eight and a sloppy tee shot on nine left me a lot of work to do."