Ryo Ishikawa sank a 30-footer at the last for a third consecutive birdie to edge a stroke in front after the second round while Tiger Woods also charged into contention at the Quicken Loans National in Virginia on Friday.

Ishikawa, seeking his first victory on the PGA Tour after twice finishing second, fired a three-under-par 68 on another hot, sunny day at Robert Trent Jones Golf Club in Gainesville to head a tightly-bunched leaderboard.

The 23-year-old Japanese, co-leader overnight with South African veteran Retief Goosen, mixed seven birdies with four bogeys to post an 11-under total of 131, one ahead of Americans Rickie Fowler (65) and Kevin Chappell (68).

Swede David Lingmerth (65) was alone at nine under while tournament host Woods was a further stroke back with eight other players after carding a 66 on a receptive, rain-softened layout.

"I hit the ball really well today, but I missed a few putts. his could have been a really low one" - Tiger Woods

"It wasn't a perfect round through 15 holes but the last three holes it was perfect, especially the 16th tee shot," grinned Ishikawa, who ended up just two inches from an ace with a nine-iron off the 16th tee.

Woods, who has mainly struggled on the PGA Tour this season while working through his latest swing change as he recovers from back surgery, piled up six birdies and a bogey to rocket up the leaderboard.

"I hit the ball really well today, but I missed a few putts," Woods said after posting his lowest opening 36-hole total on the U.S. circuit since the 2013 WGC-Bridgestone Invitational. "This could have been a really low one."

Now ranked a lowly 266th in the world, Woods said he was given extra motivation on Friday after a popped up tee shot at the 14th, his fifth hole of the day, led to his only bogey of the round.

"It got me a little fired up," smiled Woods, who finished level with eight others, including fellow Americans Pat Perez (67), Charles Howell III (67) and Jimmy Walker (63), Englishman Greg Owen (68) and South Korean Kim Meen-whee (66).

"Got me a little more focused on what I'm doing out there instead of just hitting a shot."

World number eight Fowler, who won the prestigious Players Championship in May followed by the European Tour's Scottish Open earlier this month, soared into a tie for second with a rousing birdie-birdie-birdie finish.

"It was nice to finish the way I did," the 26-year-old told Golf Channel. "I really didn't do a whole lot special, just birdying the last three made the round a special one today." 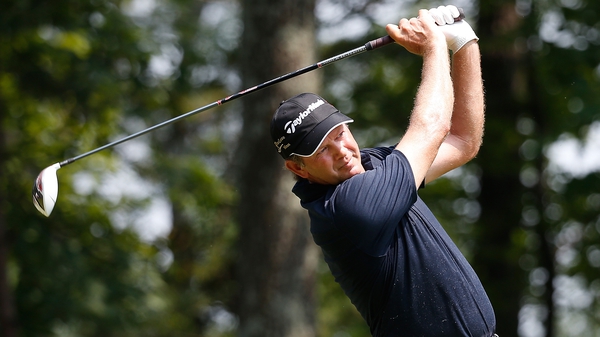