World number two Lydia Ko shrugged off a 3:30am alarm call to card an opening 66 in the Ricoh Women's British Open at Turnberry.

Ko, who started her round at 6:41am, carded four birdies in succession from the second and recovered from her solitary bogey on the sixth to pick up further shots on the seventh, 10th and 14th.

At six under par the 18-year-old was one shot behind clubhouse leader Hyo-Joo Kim of Korea, who carded five birdies and an eagle in a flawless 65.

"I pressed the snooze button a couple of times," Ko said of her early start. "It's never easy to wake up at that time, especially when in the States it's time to go to bed.

"But it was really good weather, the wind was fairly calm and we had fun out there. I might have another breakfast now, I don't know if they are serving breakfast or lunch right now."

Ko is seeking her first major title and warmed up for the event by contesting the Scottish Open at Dundonald last week, where she finished third.

"I've always said the British Open is the hardest week to prepare for and I had a couple of years where I came prior to the week and the weather was totally different, but I think it was good preparation playing the Scottish last week," Ko added on the Golf Channel. "To play links golf and in the wind, I think that was a good strategy.

"I've played solid the last couple of weeks so I just tried to trust my game and that's all I can do. It can get windy here so it takes a lot of patience at times but when you get the opportunities you try and grab them. The par fives are crucial here, most of them are reachable so you have to take advantage and make birdies there."

Irish golfer Stephanie Meadow posted an opening round two over par, which included a triple bogey on the par four eighth hole. 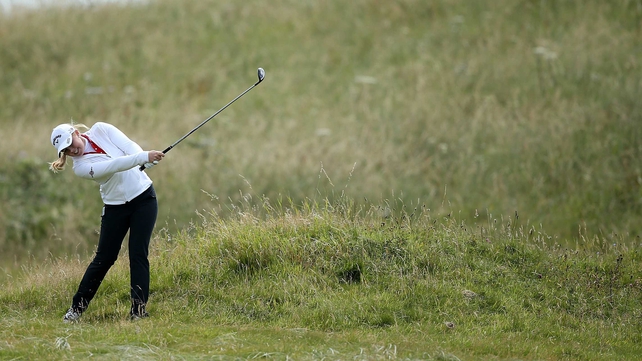 The Royal Portrush golfer managed two birdies in an otherwise steady round and will be looking to post a low score on Friday to make the cut.

England's Florentyna Parker shot a four-under-par 68, one shot ahead of world number one Inbee Park.