Bubba Watson will look to make amends for a disappointing defence of his Masters title by claiming a second European Tour title in China.

Watson won the WGC-HSBC Champions in dramatic fashion on his last visit to the country in November, holing a bunker shot for an eagle on the 18th to get into a play-off.

The left-hander then holed from 20 feet for birdie on the same hole to defeat South African Tim Clark.

Watson made the long journey east after finishing 38th at Augusta National, where he had been hoping to become just the fourth man after Jack Nicklaus, Tiger Woods and Nick Faldo to successfully defend the Masters.

"I went there with high expectations and I just didn't make any putts," the world number four said ahead of the Shenzhen International at Genzon Golf Club. "That's what changes your round, your week.

"And then Jordan (Spieth) played unbelievable golf; he was the first person ever to get 19 under and made all his putts.

"It just shows that's how you win golf tournaments, by making crucial putts at the right time."

Watson also believes he will need his driver to be working this week after getting his first look at the host venue on Tuesday.

"I played all 18 holes yesterday, and I have to say, the second is one of the tightest holes I've seen with the trees," Watson said.

"Off the tee, this golf course is very demanding. You need to position it in the right spots and then the greens are going to be tricky because of the undulation. It's about green speed.

"So it's going to be tough, but I'm looking forward to the challenge and hope to have a chance on the weekend, that's why I'm here."

"The key to this course is off the tee. If you drive the ball straight and also long, then you can score well. That was the main reason for my win here last year..." - Alexander Levy

Although the Shenzhen International is a new event, France's Alexander Levy will feel like the defending champion having won his maiden European Tour title here in the China Open last year.

"I played six holes yesterday and a lot of good memories came back," said Levy, who carded a course-record 62 in the second round on his way to a four-shot win.

"I remembered every shot I hit on the last day last year and it's great to be back here.

"I love this course and this year it's in very good shape, even better than last year. The greens are much faster this year, which I like.

"The key to this course is off the tee. If you drive the ball straight and also long, then you can score well. That was the main reason for my win here last year and hopefully I can have the same strategy and result this year."

Levy will play alongside Watson and local favourite Li Hao-tong in the first two rounds, with the 19-year-old Chinese player looking to build on four wins on home soil in the last 12 months.

"I've seen him on TV and also winning the Masters and so forth," the world number 194 said of Watson.

"All I want to do right now is step by step earn my ranking points and prize money in order to get there." 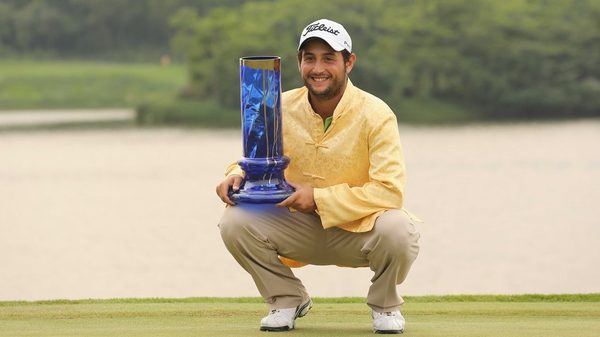