Spain's Adrian Otaegui will take a two-shot lead into the third round of the Tshwane Open after threatening to record the first ever 59 on the European Tour on Friday.

Nine birdies in the first 16 holes at Pretoria Country Club, including five in a row from the eighth, left Otaegui needing two more to break the magical 60 barrier.

However, the 22-year-old narrowly failed to chip in from the edge of the green on the 17th and then dropped his only shot of the day on the last after finding a bunker off the tee.

The resulting 62 gave the world number 403 a halfway total of 11 under par, two shots ahead of South Africa's Merrick Bremner, who birdied four of his last six holes to add a 66 to his opening 65.

Fellow home players Keith Horne and Trevor Fisher Jnr, who won the Africa Open on Sunday, were three shots back on eight under alongside England's David Horsey and Italy's Edoardo Molinari.

European Ryder Cup captain Darren Clarke chipped in on the ninth for an eagle and repeated the trick on the 10th for a birdie, but also had two double bogeys in a 67 which left him on two under.

Michael Hoey lies one shot behind Clarke after his topsy-turvy round, which featured five birdies and four bogeys, finished with a 69.

A double bogey on the 18th green (his ninth hole) proved expensive for Damien McGrane as he missed the cut by a single shot.

An otherwise highly impressive round for the Meathman saw him record seven birdies on the way to a four under 66 but it fell just short of making up for Thursday's 75.

Otaegui, who is mentored by former Ryder Cup captain Jose Maria Olazabal having played most of his junior golf at the latter's home club in Fuenterrabia, said: "I was focused and didn't know that I had made five birdies in a row.

"I was playing well and made a few putts, that's all I was thinking about. The best golf is when you think as little as possible, and this was one of those days.

"We were first to tee off this morning, conditions were perfect, the greens were perfect. I like playing this early so I really played well, made many birdies and am happy with my round."

Home favourite and club member George Coetzee is four off the lead after a 66, with defending champion Ross Fisher three shots further back following a 67. 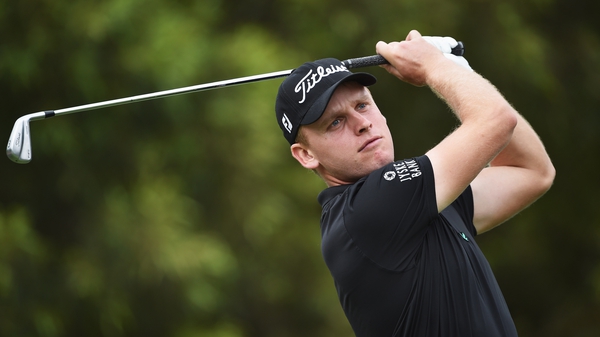