World number one Rory McIlroy apologised for throwing his three iron into a water hazard after more erratic play in the second round of the WGC-Cadillac Championship in Miami on Friday.

McIlroy had just recorded his third birdie of the day to get back to level par for the tournament when he pulled his approach to the par-five eighth - a hole he had eagled on Thursday - into the water.

And after a few seconds' thought the 25-year-old then hurled the offending club into the same stretch of water on his way to recording a six, his third bogey of the day.

McIlroy recovered to card a round of 70 to lie one under par.

"Frustration got the better of me," he told Sky Sports. "Following on from last week I feel like it's very close and to hit shots like that you get frustrated, but I shouldn't have did what I did.

"It all bottled up and had to let it go somehow and that's what happened. I don't feel good about doing it but I will hopefully have a new three iron on the way in the morning and be able to got out and play with another one.

"I wouldn't encourage kids at home to do the same thing."

It is not the first time McIlroy's frustrations have got the better of him. At the US Open in 2013 he apologised for throwing one club and leaning so hard on another during the final round that he bent the shaft out of shape.

And that came just months after he walked off the course midway through the second round of the Honda Classic, where he was defending champion, telling reporters he was in "a bad place mentally" before his management company issued a statement blaming toothache.

McIlroy missed the cut in the Honda Classic last week and struggled to an opening 73 at Doral, but looked to be getting back on track when he began his second round with two straight birdies.

However, the four-time major winner then bogeyed the third after driving into the water and three-putted the fourth before the frustrations of the course known as the 'Blue Monster' truly took their toll on the eighth.

McIlroy added on Sky Sports 4: "You can see I'm aiming left to try and cut it and it's been frustrating this week because the shots I want to cut I draw, and the shots I want to draw I cut. I'm just not quite there with the swing the way I want to and another ball in the water wasn't good.

"(I have) another couple of rounds just to try and find a little bit of rhythm. I'm a little behind at the minute but it seems like the scores are quite spread out so if I can get off to a decent start tomorrow you never know."

Of the other Irish, Shane Lowry finished one over after a second round of 74, and Graeme McDowell finished two over a second successive 73.

JB Holmes began and ended his day with ugly sixes but produced some excellent golf in between for a two-shot lead.

Four strokes in front overnight after opening with a blistering 10-under-par 62 on the daunting Blue Monster course, American Holmes followed up with a one-over 73 to retain control of the elite event.

With danger and plenty of water lurking at almost every corner of the firm and fast-running layout, Holmes mixed five birdies with four bogeys and a double at the par-four 18th to post a nine-under total of 135.

Fellow American Ryan Moore was alone at seven under after a 71 with Australian Adam Scott, who is using a conventional short putter this week for the first time in four years, a further stroke back with a 68.

Despite all the drama McIlroy ended up moving closer to the lead, with American JB Holmes finding water four times and running up a double bogey on the 18th to add a 73 to his opening 62.

That left Holmes on nine under par, two shots ahead of compatriot Ryan Moore with former Masters champion Adam Scott a shot behind after a 68. 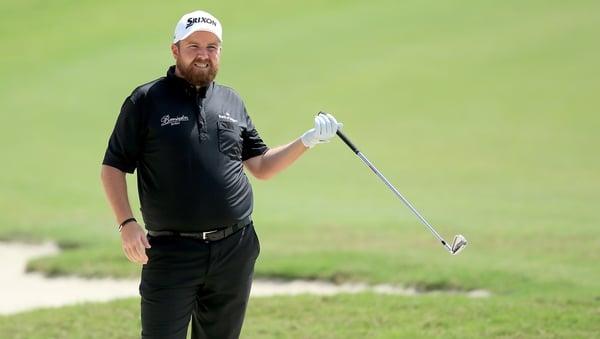 Lowry best of the Irish as McIlroy bounces back