South Africa's Nic Henning claimed a narrow lead after the opening round of the Joburg Open as home players dominated the top of the leaderboard at Royal Johannesburg and Kensington Golf Club.

Henning carding a nine-under-par 62 on the West Course - equalling the course record - to finish one shot ahead of compatriots Titch Moore and Tjaart van der Walt, as well as Belgium's Thomas Pieters.

Dean Burmester and Garth Mulroy were a shot further back on seven under to make it five South Africans in the top seven, with Scotland's Scott Henry and English pair Sam Hutsby and Simon Dyson part of an eight-strong group on six under.

Of the Irish involved; Peter Lawrie is best placed on five under after a 66, with Kevin Phelan four under, Gareth Maybin three under, while Ryder Cup captain Darren Clarke had a day to forget and is tied in 114th place.

Clarke had to birdie the last two holes for a level-par 72 on the East Course after a front nine of 39 which featured four birdies, two double bogeys, two bogeys and just one par.

Clarke has not recorded a top-10 finish on the European Tour since winning the Open Championship in 2011. 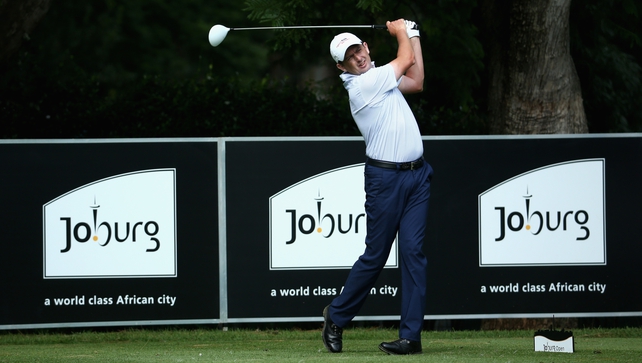 Henning has the worst world ranking possible, joint 1,555th, and admitted: "I haven't made a score like that for many many years so it's a really nice surprise."

The 45-year-old raced to the turn in 29 with five birdies and an eagle and also birdied the 15th and 16th, but added: "Let me tell the truth; I hit my second at the first thin but it was straight at the hole, I holed a nice putt on the second and was lucky with a seven iron on the third, it went straight in the hole."

The 210-strong field is split between the East and West Courses for the first two rounds, with the final 36 holes played on the tougher East Course.

And Hutsby's 66 was one of just five of the top 26 scores to come from the East Course on Thursday to give the Challenge Tour graduate a major boost after missing the cut in his first six events of the season.

Hutsby suffered from food poisoning in Thailand and India in the last fortnight and revealed he only practised for 20 minutes on Tuesday to preserve his energy.

"I didn't play any holes, just walked the course, and it seemed to work out pretty well today," the 26-year-old said.

"I know the other course is a lot more scoreable so I think it was a good draw to try and get a good score on this course and settle in."

A hole-in-one had helped Moore set the early target, the world number 388 having already birdied the first, second and fourth before holing out from 108 yards with a sand wedge on the fifth.

"It was a perfect yardage, pitched a little behind the flag and span right back in," said Moore, who also birdied the ninth, 15th and 17th in a flawless round. "It never looked like it was going to miss and making a 1 on the scorecard is always special."

Both Pieters and Van der Walt reached nine under before making a bogey on the 18th from near-identical positions left of the green, Pieters also three-putting the 16th after seven birdies and an eagle in his previous 15 holes.

Henry admitted his 65 was a "little unexpected" in his first European Tour event of the season, but was relishing facing the more difficult East Course on Friday.

"The East Course is a little tougher but I always seem to play better on the East than the West," Henry said.

"It's my third year in a row here and I don't think I have bettered one or two under on the West. It definitely is easier but for some reason I have never found it that way."