Rory McIlroy will take a four-shot lead into the final day of the Omega Dubai Desert Classic after shooting a 66 on Saturday - but it looked for a while as if it would be even better for the world number one.

Following on from his impressive opening two rounds of 66 and 64, McIlroy appeared set for a tilt at the record books on day three as a birdie blitz saw him reach the turn in five under par with the seemingly easier back nine - which included three par fives - to come.

However, the Northern Irishman could not continue his blistering form as some wayward tee shots and indifferent form around the greens saw him have to settle for seven successive pars from the 10th.

McIlroy did pick up another birdie on the par-four 17th, to go with the ones he recorded on the first, third, fifth, seventh and eighth, but he then looked set to immediately cancel that out on the last after finding water with his second shot.

The 25-year-old - who had birdied the 18th hole in 14 of his previous 16 rounds before this one - managed to avoid dropping a shot, though, as he coolly drained a 15-foot putt for par to sign for a round of 66.

That putt ensured McIlroy would start the last round with a four-shot advantage over Dane Morten Orum Madsen, who followed up his 63 on Friday with a blemish-free 66.

Two shots further back in third is Lee Westwood (69) while Andy Sullivan, Stephen Gallacher, Danny Willett and Bernd Wiesberger share fourth place on 13 under after all four shot rounds of 70.

Graeme McDowell shot a 72 to finish on 12 under, while Michael Hoey’s 71 saw him end on three under.

Peter Lawrie and Damien McGrane are both on one under after rounds of 73 and 74 respectively.

McIlroy, who held a one-shot lead over Scotland's Marc Warren coming into the weekend, admitted he was very pleased to avoid a bogey with his testing putt on the last.

He told Sky Sports: "It meant a lot, to be bogey free again today was important to me. To get that up and down on the last was big for momentum going into tomorrow."

He added: "It was nice to make one birdie on 17th and then a great save on the last, it was nice to go round there today with no bogeys. I can't complain, another good round and I'm in a great position going into tomorrow."

Following his brilliant front nine, the chance to break Ernie Els' course record of 61 - or even going sub-60 - looked a possibility, but McIlroy insisted his only thought was to put as much daylight as possible between himself and his rivals at the of the leaderboard.

He said: "[I was] Just trying to get as many in front as I can. I knew I had some chances coming in but saying that, the back nine did play tricky. The greens got firm, the wind got up a little bit, so it was hard to get the ball close to the hole.

"You had to hit quality shots to give yourself chances for birdies, and I didn't quite do that on the back nine like I did on the front." 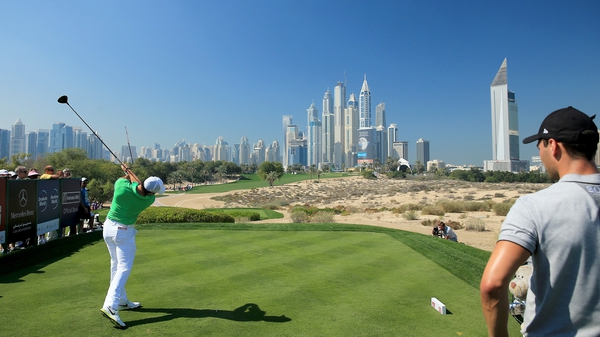