Jimmy Walker slammed the door on his competition and rebounded from last week's disappointment with a tournament-record nine-stroke victory in the Sony Open at the Waialae Country Club in Honolulu.

Walker, the tournament's defending champion, started the day with a two-stroke lead but strung together three consecutive birdies midway through the round and finished with a seven-under 63 and a total of 23-under par 257.

The previous mark for largest margin of win at the tournament was seven strokes.

Walker's victory comes a week after he blew a golden chance of capturing the Hyundai Tournament of Champions in neighboring Kapalua, where he led eventual winner Patrick Reed by four strokes with four holes to play before losing in a playoff.

This time Walker showed no sign of letup as he finished his final round with seven birdies and no bogeys.

"I wanted to finish out the day like I didn't last week," Walker told reporters after finishing off the largest win on the PGA Tour since Brian Gay's 10-stroke romp at the RBC Heritage in 2009.

"It was really fun. The wind picked up but I kept hitting good shots and making putts."

After leading Matt Kuchar by two strokes for most of the front nine, Walker collected three straight birdies starting with the eighth hole and left the field playing for second place.

Scott Piercy took runner-up honors after a 66 left him at 14-under while Kuchar, Harris English and Gary Woodland all ended up at 13-under.

Kuchar was the closest contender to start the day, but failed to make a single birdie en route to a 1-over 71.

Piercy charged up the leaderboard late but never placed any real pressure on the winner.

"He's one of the hottest players in the world," Piercy said.

"What he's done the last year or two years, nobody's catching him. It's just a cake walk."

The 36-year-old Walker, who played on the U.S. Ryder Cup team last September, has compiled all four of his career wins in the past 15 months after the early part of his career was blighted by injury and poor form.

"I'm just more confident and more comfortable," Walker said. "I have good people (around me). It's quite a bit different, really." 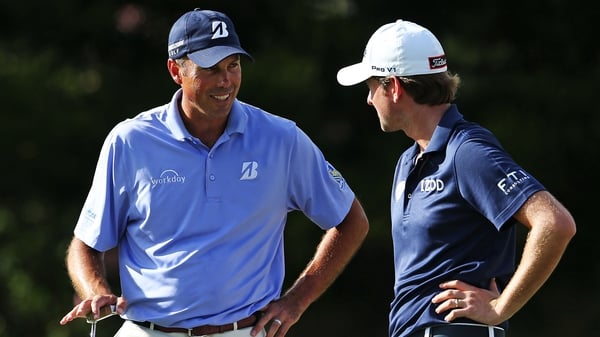