Poulter held a three-shot lead when an approaching thunderstorm forced play to be suspended on Friday afternoon, while more storms overnight saw the scheduled restart put back by an hour this morning.

However, Poulter simply carried on where he left off with a birdie on his first hole of the day, the 15th, and parred the last three to add a second round of 66 to his opening 64.

That took the 38-year-old to 33 under par for his last six rounds at the Montgomerie Maxx Royal and 14 under for the tournament, a lead of six shots over Ireland's Shane Lowry, Spain's Miguel Angel Jimenez, American Brooks Koepka, Australian Wade Ormsby and South African pair Branden Grace and Hennie Otto.

Darren Clarke is two over following a 70, while Michael Hoey is 14 over.

"I played exactly the same last week but didn't hole my putts," said Poulter, who finished joint sixth in the WGC-HSBC Champions last Sunday, the tournament which provided his last win in 2012.

"I'm taking my chances this week and I need to continue to do that even in the tricky conditions. There are still five par fives, people can still make birdies so I am going to need to do exactly the same.

"It's really exciting (to be in this position) - 2014 was looking pretty glum, hopefully we can turn it into a good one."

Round three had already started while the second round was being completed, with the players sent out in the same groups in an attempt to make up for lost time. However, the weather forecast was for more storms which could further disrupt play. 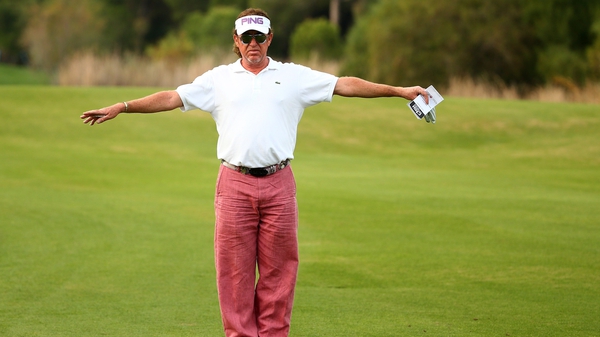 Jimenez bounces back to lead in Turkey