Scotland's Peter Whiteford led the way at the halfway stage of the ISPS HANDA Perth International while England's James Morrison catapulted himself into contention by breaking the course record at Lake Karrinyup.

Whiteford followed up his 66 on the opening day with another six-under-par score in his second round and was once again in superb touch on the front nine.

After starting at the 10th on Friday, the 34-year-old - who requires a top-two finish to hold onto his European Tour card - had only one birdie to show for his efforts but he picked up shots at three of his next four holes after the turn.

He then eagled the par-five seventh for the second day in succession to move to 12 under par for the tournament, one ahead of Denmark's Thorbjorn Olesen.

Damien McGrane is best of the Irish, eight shots behind the leader after a 70 left him on four under, one ahead of Kevin Phelan who carded 69, while Peter Lawrie saw his European Tour card disappear after missing the cut on eight over with a 77 following his first round 75.

Gareth Maybin also faces a return to Tour school after missing the cut on level par.

Whiteford told the European Tour's website: "You're always thinking you could have done better, but that eagle made me feel a lot better.

"This week it's no holds barred - win or bust. I'm very nervous, there's no doubt about that. I've got to just keep attacking.

"I don't want to go back to (the qualifying) school - nobody does - but I get what I deserve in this game, and I've been awful all year. It's nice that the form is coming back later on in the year."

Sihwan Kim, another player needing at least a top-two finish to avoid losing his tour card and go to qualifying school, is on 10 under par overall.

Morrison is in joint fourth - alongside Scotland's David Drysdale - after a flawless nine-under-par 63.

The 29-year-old was well adrift of the frontrunners after an opening 72 but is now just three shots off the lead following his bogey-free round which included birdies on four of his final five holes.

That ensured he broke the previous record, held overnight by Olesen and John Wade, both of whom shot 64s in their first round.

"I knew I was playing well. I actually know in Perth it gets windy in the afternoon and calm in the morning, so I was hoping for a nice calm day. I got that and just played great all day really," said Morrison.

Wade remains on eight under par, alongside fellow Australian Richard Green, after failing to advance his overnight score.

Charl Schwartzel, the Masters champion in 2011, is a shot further back while Ryder Cup hero Victor Dubuisson occupies a top-10 spot, six shots off the lead. 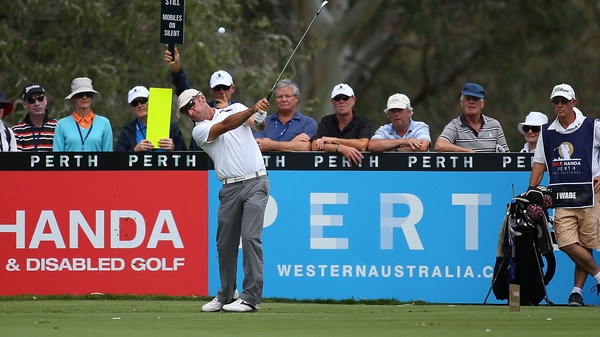 Wade and Olesen lead in Perth as Irish struggle