Rory McIlroy missed out on a $10 million bonus as Billy Horschel won the Tour Championship and the FedEx Cup title in Atlanta on Sunday.

McIlroy and Horschel were among the five players who arrived at East Lake knowing victory in the season-ending tournament would not only be worth the first prize of $1,440,000, but also secure the overall FedEx Cup title and a $10 million bonus.

The pair went into the final round tied for the lead and with McIlroy a clear favourite to claim a fifth win of the season, but the world number one struggled to a closing 71 that left Horschel to battle it out with Jim Furyk for the win.

Horschel was two clear after a front nine of 33 and after Furyk drew level with a birdie on the 15th, Horschel edged ahead once more with his own birdie on the par five minutes later.

But it was the 16th which proved crucial in deciding the outcome, Horschel holing from 30 feet for an unlikely par after finding trouble off the tee and Furyk then dropping a shot on the 17th.

Furyk also three-putted the last to allow Horschel to fully enjoy his brilliant achievements over the last three weeks, the 27-year-old having won the BMW Championship in Denver last week and finishing runner-up in the Deutsche Bank Championship the week before.

A closing 68 saw Horschel finish 11 under par, three shots ahead of Furyk and McIlroy, who birdied the 15th, 16th and 17th to restore some respectability, with Justin Rose, Chris Kirk and Jason Day a shot further back.

Rose twice got within two shots of the lead on the back nine but bogeyed the 13th and 17th at crucial moments on his way to a closing 69.

Things seemed to be going McIlroy's way when he hit a wild drive on the fourth but had a clear shot to the green and ended up holing from 18 feet for birdie.

Horschel followed McIlroy in from 11 feet to remain tied for the lead before edging ahead on the next, where he holed from 18 feet as McIlroy had to settle for par.

"When I look back on the year as a whole it's been my best year to date so I can't complain," - Rory McIlroy

Perhaps the decisive moment arrived on the treacherous par-three sixth, where Horschel hit a superb three iron into the heart of the green and then saw McIlroy, attempting to hit two clubs less, pull his tee shot into the water surrounding the green.

From the drop zone McIlroy pitched to 12 feet and two-putted for a double-bogey five and the four-time major winner found more trouble on the ninth, the 25-year-old's wild drive finishing up against a fence separating the par-five from the practice ground.

After weighing up his slim options, McIlroy told caddie JP Fitzgerald: "I'm just going to blast it, see where it goes", and proceeded to try to hit his second shot over a group of trees just a few yards in front of him.

The ball inevitably made contact but rebounded out towards the fairway, but having laid up with his third shot, McIlroy missed the green with his approach and in the end did well to get up and down for a bogey six.

Horschel looked to have given McIlroy a glimmer of hope when he found thick rough off the tee to bogey the 10th, only for McIlroy to then three-putt from 20 feet and also bogey the 11th to effectively end his chances.

"It's unbelievable," said Horschel, who missed the cut in the first play-off event and admitted he had already started to think about next season.

"I remember flying home and talking to my wife. She said you're probably just waiting until the season is over because it hasn't been a great year and I sort of was, but at the same time I knew my game was in the right shape and I just needed to get out of my own way, allow my golf game to show and it has showed the last three weeks." 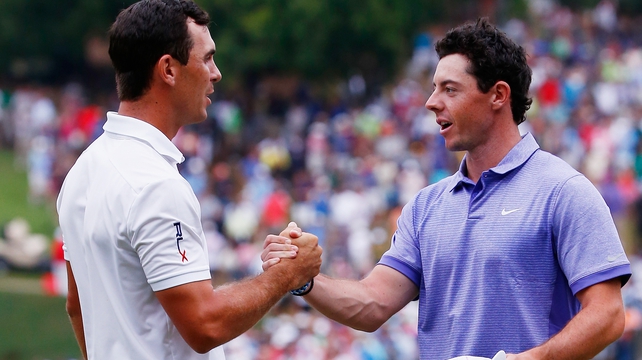 Horschel's wife Brittany was not in Atlanta as she prepares to give birth to their daughter at the end of the month, Horschel adding at the trophy presentation: "Unfortunately she has not been at any of my three wins but there are many more down the road she will be at and our daughter Skylar too."

McIlroy blamed his double-bogey on the sixth on a tired swing, adding on Sky Sports 4: "I was making bad swings at the wrong time and getting punished for them.

"When Billy was making bogey on 10 I thought I had a decent chance and then I three-putt there for the second day in a row and I felt like any chance I had to win the golf tournament went."

Asked about his season overall, McIlroy added: "To win two majors, my first WGC event and give it a real good run in these FedEx events, I'm really proud of myself the way I hung in there and dug deep the last few weeks.

"When I look back on the year as a whole it's been my best year to date so I can't complain."