While the prospect of earning a $10 million bonus after this week's Tour Championship finale is tantalising, Rory McIlroy says he is much more motivated by the chance to win the PGA Tour's FedExCup trophy for the first time.

The Northern Irish world number one has already enjoyed a brilliant 2014 campaign, clinching two major titles among four wins worldwide, and has now set his sights on claiming play-off honours on the US circuit after a season-long race.

Both the Tour Championship and FedExCup titles are on the line at East Lake Golf Club this week and McIlroy is one of just five players in an elite field of 29 who is automatically guaranteed the overall play-off prize if he wins the tournament.

"I'm not saying that I'm not motivated by the money in any way," McIlroy, who won back-to-back majors this year at the Open and PGA Championship, told reporters at East Lake on the eve of the PGA Tour's season-ending event.

"It's obviously nice, and I've made a lot of money over the past seven or eight years that I've been on tour. But one of the only things that I haven't achieved in the game of golf is a FedExCup, and that's the real reason I want to win this week.

"I just want to finish the year off well. The money's nice. It's great. $10 million is a lot of money to anyone. But at the same time it's the title that would mean more to me."

"$10 million is a lot of money to anyone. But at the same time it's the title that would mean more to me"

Giving McIlroy extra motivation this week is the fact that he narrowly missed out on FedExCup honours two years ago after he had arrived at East Lake heading the point standings following consecutive wins in the four-event play-offs.

McIlroy ended up tying for 10th in that year's Tour Championship, his only previous start in the elite limited-field event, and was edged out by tournament winner Brandt Snedeker in the race for the FedExCup.

"Anything other than a win here this week would be a disappointment," said McIlroy. "I only have to beat 28 other guys. It's not like a regular field where you have to beat 155.

"I missed out (on qualifying) last year, which obviously wasn't what I had hoped for. I had a great chance the year before that, I was No. 1 after a couple of wins. I'm in the top five, and a win this week takes care of everything else."

After winning three times on the 2013-14 PGA Tour where he has recorded 11 top-10s in 16 starts and no finish worse than a tie for 25th, McIlroy is a heavy favourite to land Player of the Year honours on the US circuit once the season is over.

"Hopefully by the end of this week there shouldn't be any doubt about the Player of the Year award," McIlroy smiled. "But depending on who wins this week, you never know.

"I feel like I've had a good enough year, a couple of majors, a World Golf Championship, a big event over in Europe as well," he said, referring to his victory in the European Tour's flagship BMW PGA Championship in May.

"I've had big wins, but I'd love to finish it off well with a win this week."

For only the second time since 1992, the Tour Championship this week will feature neither Tiger Woods nor fellow American heavyweight Phil Mickelson in the elite field but McIlroy does not view this as a changing of the guard.

"Tiger hasn't had the opportunity to play," said McIlroy. "But I think when he gets back to full fitness, you'll see him back here again.

"They're just getting older. Phil's 44 and Tiger's nearly 40, so they're getting into the sort of last few holes of their career. And that's what happens. You get injured. Phil has to deal with an arthritic condition as well.

"It obviously just gets harder as you get older. I'll be able to tell you in 20 years how it feels."

Left-hander Mickelson failed to qualify for East Lake after withdrawing from the penultimate playoff event, the BMW Championship, because of fatigue and his desire to rest ahead of the 26-28 September Ryder Cup.

Woods has not played competitive golf since he missed the cut at last month's PGA Championship, and ruled himself out of Ryder Cup consideration due to lingering back problems. 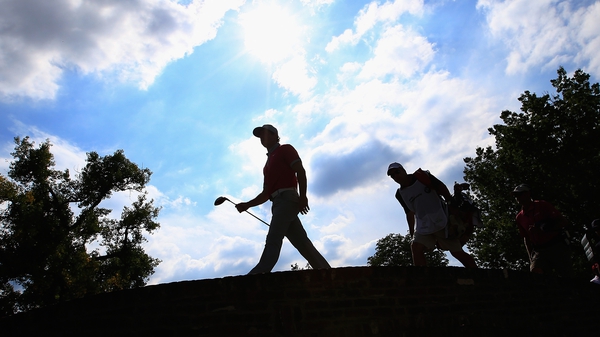 Horschel in BMW driving seat as McIlroy slips back