World number one Rory McIlroy was delighted to claim his second major in four weeks and a third win in succession after a thrilling, weather-affected climax to the US PGA Championship on Sunday.

McIlroy carded a closing 68 at Valhalla to finish 16 under par, one shot ahead of Phil Mickelson after a remarkable final day which finished in near-darkness with the lights blazing from the clubhouse behind the 18th green.

Rickie Fowler and Henrik Stenson had been part of a three-way tie with Mickelson on the back nine but dropped shots on the closing stretch to finish two behind McIlroy.

A torrential downpour which flooded the course and caused a delay of almost two hours meant it was a race against time to get play finished, so much so that Mickelson and Fowler stood aside on the 18th to allow the final group to tee off and play their approaches to the green.

"It's been just incredible," McIlroy said. "I didn't think in my wildest dreams I would have a summer like this. I just played the best golf in my life."

McIlroy, who won the 2011 US Open and 2012 US PGA by eight shots and was six clear going into the final round of the Open at Royal Liverpool, added: "I gutted it out today, it was a little different to my previous major wins. I think I showed a lot of guts to get the job done.

"I want to thank Phil and Rickie for letting us tee off, if they didn't it would have been a struggle to finish. It showed a lot of sportsmanship and class from those two guys."

Asked if he considered not finishing the hole, McIlroy added: "No, I wanted to win this thing and get out of here! It was very tough with the bunker shot and the depth perception so I decided to just chunk it out there, take my two putts and run."

Mickelson did not appear happy with the decision to allow McIlroy and Bernd Wiesberger to hit their approach shots to the 18th as he and Fowler stood aside, but added: "It didn't affect the outcome I think. It's not what we normally do but it's not a big deal.

"It's a courteous thing to let the guys tee off in case they blow the horn. It gave everyone a chance to finish just in the nick of time." 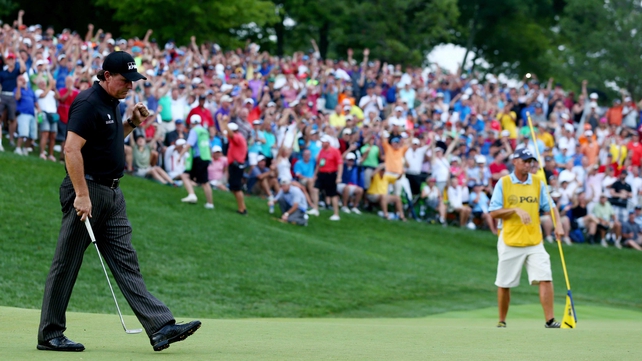 As for a closing 66 which sealed his place on the US Ryder Cup team, Mickelson added: "It was fun to get back back in the mix and feel the pressure. I just ran out of steam after 12 holes.

"I wasn't really firing on all cylinders but making some key putts and had a nice round going. After that birdie on 11 I thought if I could get one or two more I would be right there and it was a costly bogey on 16 in the end.

"I am disappointed in the outcome, if I could have finished the last five or six holes strong it could have flipped the way I feel about the whole year."

Fowler has now finished fifth, second, second and third in the year's four majors but acknowledged today was the first real chance he had to win.

"This is the first one that hurts," Fowler said. "I played well to put myself in a good position and unfortunately just made a couple of bad swings on the back nine that put me in bad positions.

"The performances in the majors is something I can be proud of but Rory has been a deserving champion every time. We will see if we can get one away from him at some point."

Stenson was left to rue a three-putt on the 14th, adding: "There were a lot of roars being thrown back and forth and a lot of birdies being made. It must have been a great championship to watch on television or out there. I was part of it. I'm happy with that. Gave it my best.

"I was four shots back when we started today. It would have taken a back nine similar to my front nine, I guess, to pull it off. I just didn't have it. I had one half of it, not two." 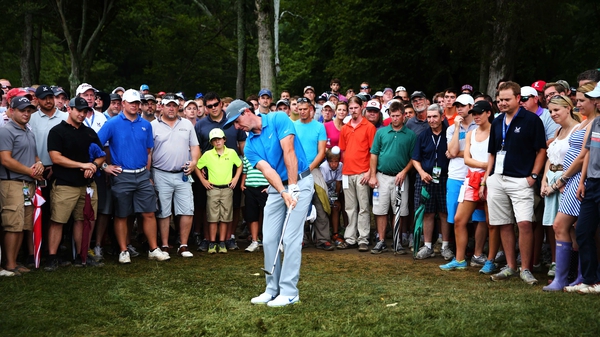