Graeme McDowell is just two-shots behind leader Mikko Ilonen heading into the final round of the Irish Open at Fota Island, Cork.

McDowell's challenge for a first Irish Open title at the 13th attempt looked to be petering out after he bogeyed the eighth and ninth to reach the turn in 37.

But the former US Open champion gave himself a talking to on the 10th and his patience paid off with birdies on the 11th, 16th and 17th to card a 69 and lie two off the lead on 10 under.

"Walking down the 10th I had to have a chat with myself and stay patient, I only needed three birdies not six," said McDowell.

"It helps having been in this scenario before and it was nice to birdie two of the last three there and get myself back in this golf tournament.

"I really enjoyed the crowd interaction today, it's been a fun week and it would be nice to put the icing on the cake tomorrow with a big round.

"I'll try and give them what they want tomorrow, an Irish winner, but there's a lot of names on that leaderboard that will have some issues with that.

"But most importantly, to win here in front of my home fans, with everything that's gone on in Irish golf lately, with the Open Championship (at Portrush) announcement, Rory (McIlroy) and his Olympic announcement this week and just generally what's been going on in Irish golf, I think it would be fun to do the business tomorrow.

"Having played in Ryder Cups and major championships I guess thankfully I'm experienced with this type of atmosphere and this type of crowd.

"But there's something a little bit special about the dynamic of the Irish fans and I'd dearly love to give them what they want tomorrow."

Gareth Maybin is just two shots behind McDowell in a share of eight place after a two-under-par 69.

Padraig Harrington is six under after shrugging off a double-bogey on the third to finish with a level-par 71.

Michael Hoey and Peter Lawrie both carded 70s to bring them to four-under and two-under respectively.

Darren Clark's one-over 73 saw him slip back to level par.

A second hole-in-one in the space of two months helped England's Danny Willett set a course record of 63 and vault into contention for a second European Tour title.

The 26-year-old is one shot ahead of McDowell and one behind Illonen on 11-under.

Fresh from finishing 45th on his US Open debut at Pinehurst last week, Willett had already birdied the fourth and added another at the eighth to reach the turn in 32.

The former English Amateur champion's challenge was slowed by a run of four straight pars on the back nine, but he then birdied four of the last five holes to beat the previous record of 64 set by Ilonen on Thursday.

Ilonen remained on course to claim his fourth European Tour title with a wire-to-wire victory thanks to a birdie on the last to complete a round of 69.

And the 34-year-old former British Amateur champion - who won at Open venue Hoylake in 2000 - admitted his chances would be improved by partnering Willett rather than McDowell in front of the massive home crowds on Sunday.

"It will help," said Ilonen, who lost a play-off to Sergio Garcia in the Qatar Masters in January. "Graeme will be in front of us but it will be the same as today. I have been leading all the way and handling the pressure pretty well so far.

"I was off here and there today, especially with a couple of drives in the beginning on the par fives. All in all I kept it together nicely, I felt good on the course and pretty pleased with how I am placed." 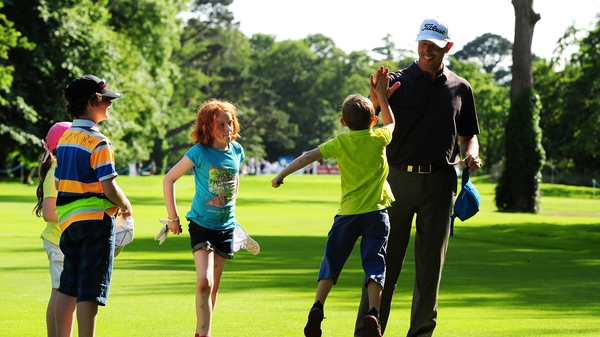