Bubba Watson took a one-stroke lead after the third round of the Memorial Tournament in Ohio as overnight leader Paul Casey fell away.

Watson carded a second successive 69 to add to his opening 66 as he and fellow left-hander Scott Langley secured their places in the final group on Sunday.

Five birdies in six holes on the front nine took Watson to the fore, the highlights being excellent approaches to six feet at the third and eight feet at the sixth.

He was six inches short of an eagle at the par-five seventh, with his good run of holes marred only by a bogey at the fourth.

Dropped shots on the 11th and 18th restricted his lead, though he added one more birdie with a 12-foot putt on the 15th to ensure a third sub-70 round and leave him on 12-under.

Rory McIlroy is among the group on six under after following up his nightmare 78 on Friday with a three-under-par 69.

The Northern Irishman, who held a three-shot lead after shooting a brilliant 63 in his opening round, looked set for another forgettable day as he bogeyed three of his first six holes.

However, birdies on the fifth, eighth, 17th and 18th, combined with an eagle three on the 11th, saw him climb back up the leaderboard and a good final round could yet see the BMW PGA Championship winner challenging the leaders.

Scott Langley produced a bogey-free 67, with a solitary front-nine birdie at the fifth and a strong back nine.

He picked up shots at 10 and 11, holed a long putt at 15 and sent a bold approach narrowly over a bunker and close to the pin on 17 for another birdie.

Japan's Hideki Matsuyama is a shot further back at 10 under after a closing 15-foot birdie putt gave him a round of 69.

World number one Adam Scott is alone in fourth at nine under.

Overnight leader Paul Casey recorded a disappointing 76 to slip down the leaderboard to eight under, though he is in good company in a group containing young sensation Jordan Spieth, who shot 67, and major winner Charl Schwartzel.

The damage came on the back nine as Casey bogeyed the 10th and missed a short birdie putt on the par-five 11th after a clever chip.

He overhit his flop out of a bunker at the 12th and duffed a chip at the next and though he holed a long birdie putt at the par-three 16th, even that good work was undone at the last.

Casey's approach spun back off the green and after another indifferent chip, he again missed a makeable putt.

Ben Martin, Ben Curtis and Andrew Svoboda were at seven under, the latter holing from a greenside bunker to birdie the last for a 68. 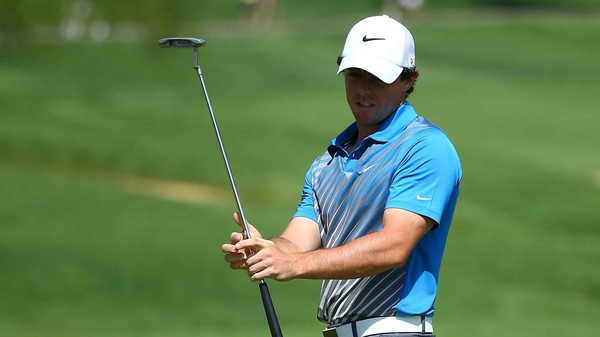