Life as the world number one got off to a dismal start for Adam Scott as a string of bogeys saw him fall way off the pace at the Crowne Plaza Invitational in Forth Worth, Texas.

Scott, playing his first tournament at the top of the rankings, started on the back nine and promptly bogeyed four of his opening nine holes before turning things around with three birdies to sign for a one-over 71.

Even so, Scott - who became the world number one on Monday - was looking on the bright side as he ended the day five shots off Dustin Johnson's lead.

Johnson could enjoy the view from the top of the leaderboard after a bogey-free round of 65, picking up four holes on the opening nine before playing it steady on the way back.

He leads by one from a trio including Hunter Mahan, who set a blistering pace to make the turn in 29, six under par, before losing momentum and making a double-bogey on the 18th to leave Johnson out in front alone.

Tim Wilkinson, Robert Streb and Harris English joined Mahan on 66, with FedExCup leader Jimmy Walker, Jason Duffner and Jordan Spieth in a group tied for sixth on 67 behind.

"I thought I actually hit plenty of good shots and played from the fairway for 4 over, so it wasn't ideal," Scott told the PGA Tour website.

"But I managed to tighten up on the back and make a couple of putts...

"I can't say I found my rhythm shooting four over, but I felt like everything was in a good spot. I just have to be a little patient, and I think sometimes on a course like this, you need to be.

"Even with a short iron or a wedge in your hand, you can't force it because bogeys are easy to come by." 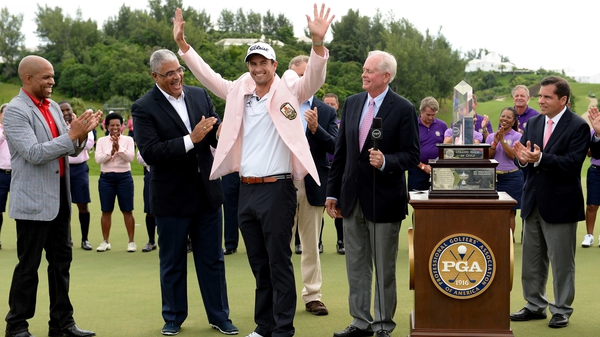