Scotland's Scott Henry set the clubhouse target in the first round of the severely weather-affected Madeira Islands Open, which has been reduced to 54 holes.

Persistent fog meant no play at all was possible on Thursday and another lengthy delay due to the same problem on Friday forced tournament officials to cut the European Tour's 1,500th official event to three rounds.

A further reduction to 36 holes at Santo da Serra remains a possibility with some players having managed just one hole of their first rounds before play was suspended due to darkness at 8:17pm on Friday.

Henry had looked set for a commanding lead when he reached seven under par with two holes to play, but dropped shots on the eighth and ninth meant he had to settle for a five-under-par 67.

England's Andrew Marshall, Spain's Pedro Oriol and Austria's Martin Wiegele were all safely in the clubhouse on three under, with Spain's Carlos Aguilar and Sweden's Johan Edfors another shot back following rounds of 70.

Of the Irish competitors, David Higgins was level par after completing his first round, and Peter Lawrie and Gareth Shaw were one over having completed theirs.

Ruaidhri McGee and Dara Ford were both level, after three and two holes, respectively. Kevin Phelan, meanwhile, was two over par after eight holes.

Play is scheduled to resume at 8am on Saturday.

Henry, who lost his full European Tour card at the end of last season, said: "I got off to a fast start which was nice. Recently, in the few tournaments I've played, I haven't done that, so it was nice to start well.

"It was a tough day and I would have taken five under before I went out. It was strange, because it was so tough I didn't expect to get to seven under like I did. I had a couple of tough holes to finish with and two bogeys in the last two was a bit frustrating.

"I'm really pleased though, I played well and I'm in the hunt for tomorrow. Hopefully we can get 36 more holes done. That's going to be the biggest challenge.

"I'm quite happy just to be in the hunt. I feel like I'm playing good again so whatever happens tomorrow I'm looking forward to it. It would be amazing to win but we have a long way to go.

"It was certainly tough yesterday. I was in the clubhouse for 10 hours, from 7:00am, so it was long. I drank a lot of coffee and ate a lot of Madeira cake - that was about it. I think the cake kept me going today." 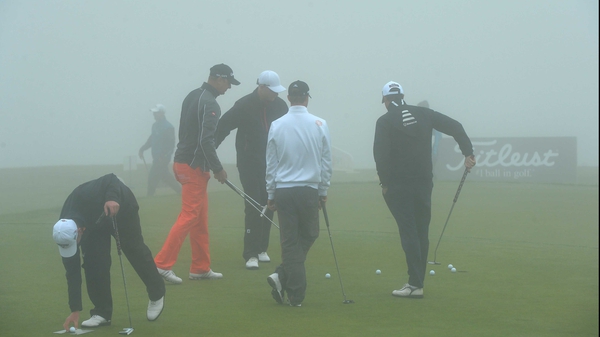 No play on day one of Madeira Islands Open