Chile's Felipe Aguilar holed out for an eagle on the par-four 18th to complete a stunning back-nine fightback and secure an unlikely one-stroke victory at The Championship in Singapore on Sunday.

Aguilar added six more birdies after making the turn, including one on the notoriously difficult par-three 17, to sign for an error-free 10-under-par 62 and a tournament tally of 22-under at the co-sanctioned European and Asian Tour event.

Overnight joint-leader Anders Hansen of Denmark (67) had started his round with a bogey but picked up five birdies before the turn and looked set to claim a first European Tour win in five years.

But he was pegged back by a bogey on the 16th and then needed to birdie either of the last two holes to tie Aguilar and force a playoff but fell just short.

Hansen, who has three wins on the European Tour, finished joint second alongside American David Lipsky, who carded a bogey-free 65.

India's Rahil Gangjee birdied his last five holes during his round of 65 to finish three shots behind the winner in fourth.

Thailand's Panuphol Pittayarat, who had topped the leaderboard on the first three days, suffered a meltdown on Sunday and carded a 74 to finish eight shots back of the winner in a tie for 11th.

Of the Irish, Peter Lawrie and Simon Thornton shared 20th place on 12 under, with Gareth Maybin on five under.

"This is something very, very special"

"Yesterday, I didn't have a good round and you figure that you're so far back that you have no chance," Aguilar, who had shot a 72 on Saturday, said.

"But today after I shot two-under on the front nine, I knew I had to go deep and I hit the ball the best I ever have and went for every single pin."

Aguilar, whose only previous European Tour title came in neighbouring Indonesia six years ago, hailed his finish and the win as "special".

"Eight under on the back nine to win is pretty strong, especially making the last one on 18 being between clubs. This is something very, very special," the Chilean added after winning the $1.5 million event that was switched to Singapore from South Korea because of "staging issues".

"I was right in between clubs and with the adrenaline you don't want to hit a half shot. So I took a hard pitching wedge and it went in - it was very special finishing like that." 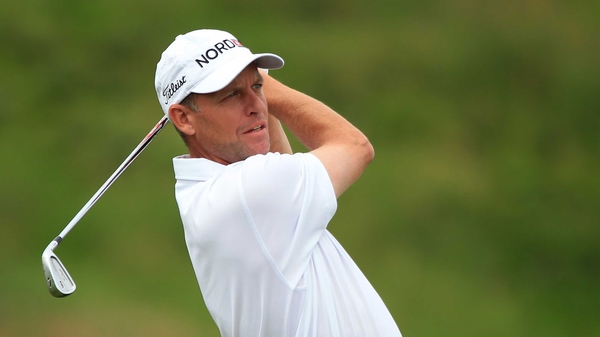 Anders Hansen and Panuphol Pittayarat lead The Championship in Singapore