Matt Kuchar will take a four-shot lead into the final round of the Shell Houston Open after Sergio Garcia's title challenge faded.

Garcia held a one-shot lead at the halfway stage after a flawless 65 in the second round, but could only manage a 73 on Saturday as playing partner Kuchar took command of the last event before the US Masters.

Kuchar carded a four-under-par 68 to finish 15 under par, but could be left to rue a three-putt bogey on the 18th that was only his third dropped shot of the week.

Garcia shared second place with American Cameron Tringale on 11 under, with Australian Matt Jones a further two shots back after recovering from a triple-bogey seven on the sixth to card a 71.

Rory McIlroy was one under after struggling to a 74 while fellow former world number ones Luke Donald and Lee Westwood fared better and were three under par after matching rounds of 71.

Garcia was on the back foot from the moment his approach to the opening hole came up short of the green in a bunker and he failed to save par from a poor lie, leaving Kuchar to hole from six feet for birdie to assume the lead.

A birdie from seven feet on the third briefly got Garcia back on level terms, but world number 11 Kuchar quickly responded with a superb pitch to the par-five fourth to card his second birdie of the day.

Kuchar, who had hit all 18 greens in regulation in his opening 66, also birdied the fifth from 10 feet to open up a two-shot lead, but then dropped only his second shot of the week on the ninth when his tee shot on the ninth - a 230-yard par three played into the wind - came up well short of the green.

Garcia, who did well to two-putt for par there from 80 feet, has had 12 consecutive top-20 finishes worldwide since late last season, including wins in Thailand and Qatar, but his chances of another victory suffered a major blow with bogeys on the 10th and 11th.

The 34-year-old was left shaking his head in disbelief when his approach to the 10th pitched near the flag and bounded over the green, but he only had himself to blame after driving into the water on the next.

In the end he did well to salvage a bogey from a greenside bunker there and holed from seven feet for birdie on the 12th, only to see Kuchar's approach to the 12th spin to a halt just inches from the hole.

Kuchar's birdie took him to 14 under par and he continued to produce some impressive golf in pursuit of a seventh PGA Tour title, pitching to two feet for a birdie on the 13th and making it a hat-trick from 11 feet on the next.

At that stage Kuchar enjoyed a five-shot lead but he surprisingly three-putted the 18th as Garcia got up and down from over the green to keep his chances of a ninth PGA Tour title alive.

It's a bummer to three-putt the last one," Kuchar said. "My speed got a little off there, but all in all I putted well. I'm not at all disappointed with the way I putted or the way I played."

He finished fourth at last week's Valero Texas Open after being tied for the lead with nine holes remaining.

"It's a nice position to have played well last week, to have been in the last group with a chance to win and again to come back this week, completely different course and have another shot to win," he added. 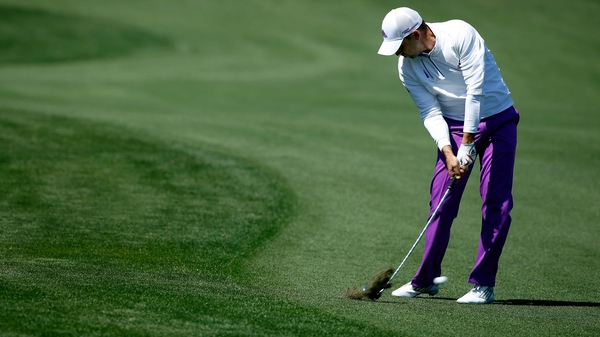