Alejandro Canizares and Seve Benson maintained the status quo at the top of the leaderboard after the second round of the Hassan Trophy.

Canizares held a one-shot lead over Benson after a stunning opening 62 at Golf du Palais Royal in Agadir, the Spaniard carding 11 birdies and one bogey despite playing in the windier afternoon conditions.

And although Benson, who was named after the late five-time major winner Seve Ballesteros, briefly took over the lead on Friday as he followed on from his flawless 63, Canizares hit back to reclaim his slender advantage.

Ireland’s players struggled on Friday, with Michael Hoey best placed on six under par after a second round of 70. Damien McGrane was on one under after a second-round 73, and Shane Lowry was one further back, level, after two rounds of 72.

""I felt really confident so I was not thinking too much, I needed to let the golf happen" - Alejandro Canizares

After reaching the turn in 36 with a birdie at the first cancelled out by a bogey on the second, Canizares birdied six of his next seven holes, only marring his card with a three-putt bogey on the 13th from long range.

Finding a fairway bunker on the 17th cost Canizares another bogey, but a second round of 68 gave him a halfway total of 14 under par, one ahead of Benson who had also carded a 68.

"I felt really confident so I was not thinking too much, I needed to let the golf happen," Canizares told Sky Sports. "In some cases my putter was a little cold today but I kept it going on the back nine.

"It was a pity I bogeyed the 17th because that is a birdie hole but overall I am very happy to be leading at the moment and very excited for the weekend."

Canizares played with Tiger Woods in the final round of the Turkish Airlines Open last November and although he struggled to a closing 73, hopes he can use that experience to his advantage.

"It was a great experience for me playing with the best in the game," said Canizares, whose father Jose Maria played in four Ryder Cup teams. "There was a lot of knowledge to be gained and I took it in the right way.

"I saw that I could be up there if I perform and it was a fun time that gave me a lot of confidence for the rest of the season and my career."

Canizares' sole European Tour victory to date came in the Russian Open in 2006, while Benson is still looking for his first win after claiming three titles on the Challenge Tour.

The 27-year-old from Guildford has dropped just one shot in 36 holes and said: "I managed to keep the momentum going early doors through the tough holes and once I got through those I could press on a bit.

"There was no wind for the first eight or nine holes, which made it a totally different golf course compared to yesterday. It picked up a little on the back nine but nothing to what it was yesterday so it was a lot easier today.

"The game seems to be going in the right direction. I've been working hard off the course and managing to get it where I want to. I'm getting better step by step."

Spain's Rafael Cabrera-Bello occupied third place on nine under after a 67 that threatened to be even better after covering his first nine holes in just 30 shots, but bogeys at the fifth and seventh halted his charge.

The best round of the day came from England's David Horsey, who won this event in 2011, who carded a flawless 64 to lie eight under alongside Sweden's Magnus A Carlsson and American Connor Arendell. 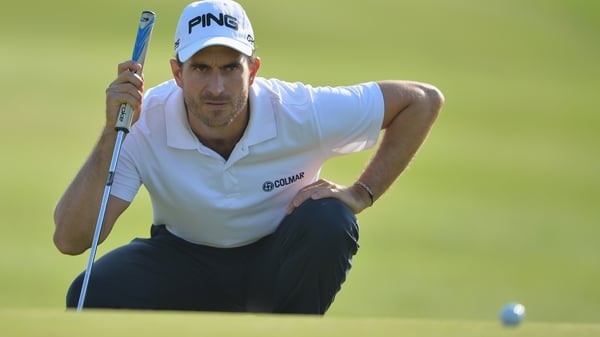 Alejandro Canizares on song in Morocco