Graeme McDowell and Rory McIlroy fell down the leaderboard at the WGC on Doral's Blue Monster with rounds of 73 and 75, respectively, on a day when Tiger Woods shot a remarkable 66.

McDowell let things slip slightly as he dropped from one under to one over, and five strokes off leader Patrick Reed, after a 73, but McIlroy fared even worse.

He had two double-bogey sevens on the par fives at eight and 10 after finding the water but improved the look of his card slightly with a chip-in birdie from the side of the 18th to finish with a 75 for three over par.

World number one Tiger Woods put his back problem well behind him to shoot the round of the week in contention, three strokes behind Reed going into the final day.

Woods, who pulled out of last week's Honda Classic midway through his final round because of injury, produced his best round for some considerable time to shoot a six-under-par 66.

That put him just three strokes behind Reed but Woods, who has won four times at this venue before it was extensively remodelled for this year's tournament, is the favourite heading into the last day.

And though he is still not 100% fit Woods proved he is still capable of producing the form which made him the most feared golfer on the planet.

"I was pretty sore last night but I'm having treatment day and my therapists are doing a fantastic job of getting me out here and playing and that's probably my most complete round [of the year]," Woods said in his post-round press conference.

"My swing is coming around. I just need to get healthy enough to put the club in that position.

"It was nice to get back in the tournament again. I held it together yesterday on a long, tough day and that gave me a chance: I was only six back and I thought that was definitely do-able.

"I got my speed right [on the greens] and I hit the ball better and left myself in good spots.”

Woods also said that the course, which had caused significant difficulties for many players in Friday’s round, was more favourable on Saturday.

"Yesterday was not what we intended it to be,” he said. “Today it is so much more playable."

Woods' tally of eight birdies was better than he had managed in the first two days and with just two bogeys he lifted himself to one under, within touching distance of the lead.

His iron play was particularly impressive, hitting approaches to third, fifth, eighth, 11th and also his tee shot at the short 15th to within 15 feet.

Reed, who has held at least a share of the lead every day, shot a three-under 69, which included a 41-foot eagle putt at the eighth, to reach four under.

Compatriots Jason Dufner and Hunter Mahan are both two under after rounds of 68 and 71, respectively, with Welshman Jamie Donaldson tied with Woods for fourth on one under after a 71.

"I am enjoying myself. It is a tough battle out there as the course is playing really difficult," Donaldson told Sky Sports.

"I am getting slowly more used to playing golf over here. I just need to make a few more putts." 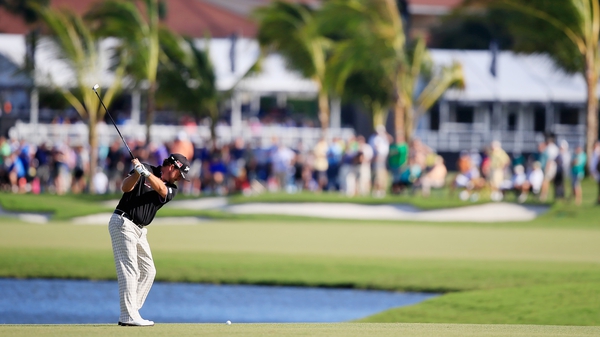 Graeme McDowell and Rory McIlroy one off Doral lead