Bubba Watson and South Korea's YE Yang were the leaders at the PGA Tour Waste Management Phoenix Open after carding seven-under-par opening rounds of 64 at TPC Scottsdale on Thursday.

Padraig Harrington is nine shots back on two over after his round of 73.

The pair were one clear of a group of seven men on six under when play ended with a handful of players still to finish their opening rounds.

Phil Mickelson, the defending champion, overcame the back injury which has been hampering him to take his place in the field, but he was a little off his game as he finished the day level.

Yang, the 2009 USPGA champion, was only one under at the turn, but had six birdies in a flawless back nine to surge to the top of the pile.

Watson, by contrast, sprinkled birdies throughout his round with four in the front nine and four coming home, with only a bogie at the 11th preventing him from sitting alone atop the leaderboard.

Pat Perez, who recovered from being one over through seven to post his 65, and Kevin Stadler led the group on six under, while Hunter Mahan and 2011 USPGA champion Keegan Bradley were among a cluster of players a further stroke back on five under.

England's Lee Westwood and Scotland's Martin Laird were the best-placed Europeans after signing for 67s, an eagle at the par-five 13th hole the highlight for the Scot.

For Mickelson an eventful level-par round of 71 which included five birdies, three bogeys and a double-bogey was the reward for overcoming a back injury.

"My game was a little rusty," he told pgatour.com. "I wasn't quite focused on every shot the way I need to be, and let way too many shots slide." 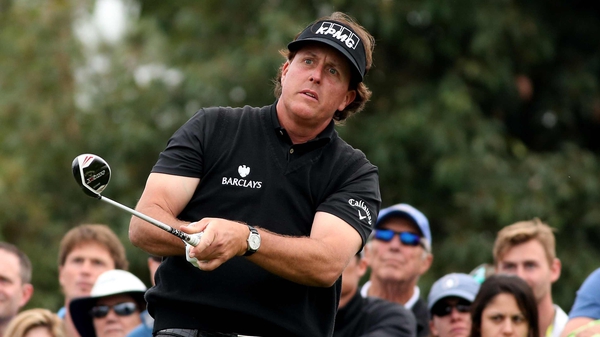