Oosthuizen was one shot behind compatriot Branden Grace with two holes to play, but birdied them both to card a closing 68 and 12-under-par total.

Grace had also completed a 68 in the group ahead to finish 11 under and watched on television as former Open champion Oosthuizen holed from two feet on the 17th and then chipped to the same distance for another birdie on the short par-four 18th.

That meant all seven European Tour events staged at Durban Country Club have now been won by South Africans, while eight of the last 11 tournaments in South Africa have been won by home players.

Dutchman Joost Luiten came third on 10-under-par while Pádraig Harrington finished in a tie for fourth place after signing for a five-under-par 67 to finish on nine-under-par.

The Dubliner had an eagle, five birdies and two bogeys in his round while of the other Irish Darren Clarke had a poor final round, shooting a five-over-par 77 to end on one-over-par.

Michael Hoey closed with a 74 to end on four over and Simon Thornton ended on five over after a closing 71.

England's Tommy Fleetwood had held a one-shot advantage heading into the final round and briefly stretched that to three thanks to a birdie at the second and mistakes from his rivals.

However, three bogeys in five holes from the fifth threw the tournament wide open and Grace was the first to take advantage with a hat-trick of birdies from the sixth.

Oosthuizen then vaulted into contention with an eagle from 12ft on the par-five eighth and the South African duo swapped the lead on the back nine before Grace – winner of the title in 2012 – looked to have made the decisive move with birdies on the 16th and 18th.

Oosthuizen had fallen victim to the 16th for the second day running, following his triple-bogey seven on Saturday with a bogey five to fall one behind, but a brilliant approach to the 17th got him back on level terms and set up a simple winning birdie on the driveable 18th. 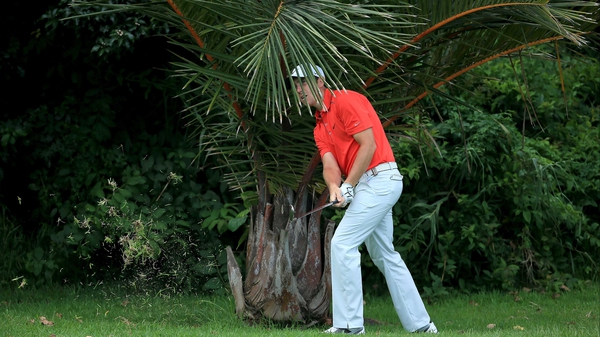