Graeme McDowell believes his decision to play the World Cup of Golf for Ireland in Melbourne this week indicates he is likely to make himself available for the same nation when golf returns to the Olympics in 2016.

McDowell is entitled to choose between competing for Ireland or Great Britain at the Rio Games.

Like fellow Northern Irishman Rory McIlroy, McDowell has been reluctant to commit to either team due to the political ramifications of such a choice and has called on the International Olympic Committee (IOC) to decide for him.

"It is a very touchy political and religious subject, one that myself and Rory have not really enjoyed answering questions about the last few years because it is very difficult to pick a side because you are going to end up upsetting someone from either side really," McDowell, who teamed up with McIlroy at two previous World Cups, told reporters at Royal Melbourne golf club on Wednesday.

"From my point of view, when the World Cup came back on the schedule and it was coming to Royal Melbourne, I knew that I wanted to be part of this team, we have always represented Ireland when it has come to the World Cup.

"So I believe that me being here and representing Ireland will, you know, with the Olympic regulations, will mean that I am - I will have to play for Ireland when it comes to the Olympics in 2016... if good enough, if eligible, if fit enough, et cetera, et cetera."

"I knew that I wanted to be part of this team, we have always represented Ireland when it has come to the World Cup," Graeme McDowell

Royal & Ancient chief executive Peter Dawson has expressed sympathy for McDowell's and McIlroy's dilemma, and said earlier this year that he hoped the burden of choice could be taken away from them.

He also suggested McIlroy's representation of Ireland at the World Cup could possibly preclude him from playing for Team GB at the Games when golf returns to the Olympic fold after a 112-year absence.

"Part of me feels relieved to not have to make that decision," added McDowell, who will team up with Shane Lowry at Royal Melbourne.

"It certainly did not enter into my reasons to wanting to be here this week. I wanted to be here and play with Shane, around Royal Melbourne, in a golf tournament which I have always loved." 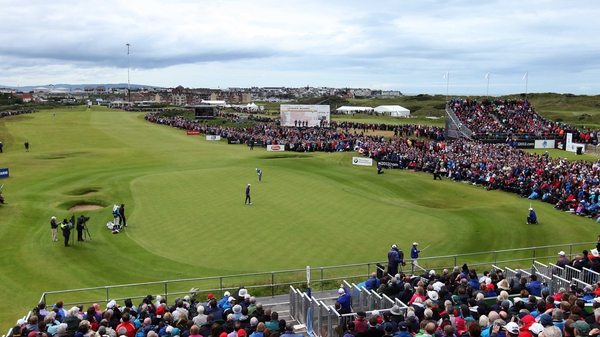