Defending champion Zach Johnson remained in a share of the lead as the John Deere Classic reached its midway point.

Johnson was joined by fellow Americans Lucas Glover and Patrick Reed on 12 under par after two rounds following a five-under-par 66, his ninth straight bogey-free at Deere Run to set a new record for the Illinois course.

"I didn't drive it very well but the positive side is I know I can play here if I don't drive it. My short game was tremendous. I putted great and I chipped it even better."

Reed and Glover had been well back from the overnight lead shared by Johnson and Camilo Villegas but surged through the field with stunning low rounds today.

Reed had seven birdies, an eagle and just one dropped shot in an eight-under 63 while Glover went one better, birdying half the holes in an unblemished 62.

Having missed five of his last six cuts, Glover said: "I've been struggling. I was ecstatic to shoot three under yesterday. You can imagine how I feel today."

Australian Matt Jones was on his own at 11 under after a 65 while Troy Matteson moved into a share of fifth, helped by the seventh hole-in-one of his career and his second at Deere Run.

An ace at the 132-yard third helped the American to a seven-under 64, leaving him alongside compatriots Kevin Streelman, Jerry Kelly and Daniel Summerhays and Canada's David Hearn and giving him hope of going one better than last year's tournament, where he lost to Johnson in a play-off.

Kelly is in contention for the final qualifying place for next week's Open, which would be his should he win this tournament, but claimed after today's round that he would decline the place and instead watch his son Cooper in his national under-15 baseball tournament.

Kelly Jr is an aspiring pitcher and his father said: "He would probably tell me to go (to the Open) but it would be really hard."

The best round of the day belonged to Chez Reavie, who eagled the par-five second and added eight birdies in a 10-under-par 61.

It represented an 11-shot improvement on yesterday to leave him three off the lead and he said: "It's a career low (round) for me.

"I think I shot eight under here a couple of years ago, I like the golf course and when you make a few putts, it's always fun. I just didn't make the mental mistakes and I made putts today." 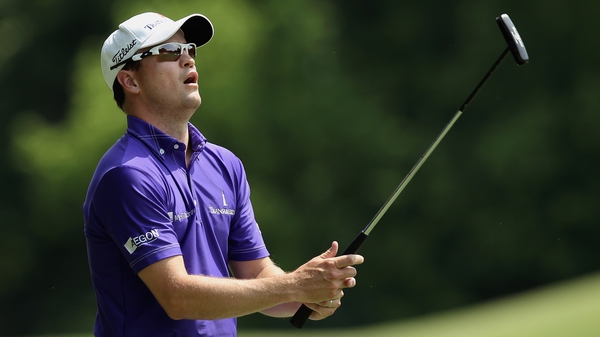