A closing birdie enabled South Africa's Richard Sterne to regain a one-stroke lead at the halfway stage of the Omega Dubai Desert Classic.

The 31-year-old was able to add only a 70 to his spectacular opening 62, but that was good enough to keep him on track for a sixth European Tour victory.

England's Tommy Fleetwood, Scot Stephen Gallacher and Dane Thorbjorn Olesen share second place, but Lee Westwood has six shots to make up - and more than 25 players to get past - after a bitterly disappointing finish.

Westwood drove wildly into the sandy waste on the 359-yard 17th and double-bogeyed one of the easiest holes on the Emirates course where he has three times been a runner-up, then failed to get up and down from just over the last green and had to settle for a 71.

Gareth Maybin and Peter Lawrie are both on eight under after shooting 67 and 70 respectively.

Damien McGrane carded a 72 to end on four under but Michael Hoey, Shane Lowry and Paul McGinley all missed the cut.

Sergio Garcia is only three behind despite a shoulder problem he thought might lead to his withdrawal and Paul Casey is one further back, but suffering from a "very very sore and painful" arthritic big toe on his right foot.

Sterne was in the world's top 30 before a long battle with a back injury and currently ranks only 165th.

He resumed with a birdie, but bogeyed the fourth and 14th and needed more birdies at the three par fives on the back nine to grab top spot back on 12 under par. 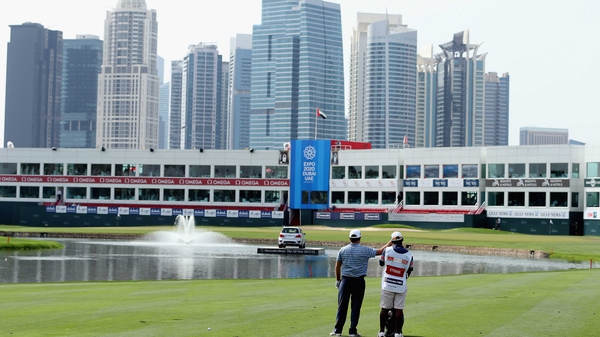