Dustin Johnson began his year in supreme style with victory in the first PGA tournament of 2013 at the Hyundai Tournament of Champions.

Overnight leader Johnson carded 16 under par overall to finish four strokes ahead of Steve Stricker in Hawaii, where the tournament was reduced to three rounds as a result of the freak weather.

Play had been delayed for three days because of winds of up to 50mph, which meant two rounds had to be completed yesterday.

The events have not fazed American Johnson, who began the day with a three-shot lead before sealing success with an impressive five-under-par 68.

The American looked to be cruising to victory when he birdied three of his first eight holes, although he dropped back to one under for the day with a double-bogey at the par-four 13th.

Any doubts over Johnson's mindset were erased, however, when he eagled the next hole and picked up further shots at the 15th and 18th for good measure.

Stricker, who was in danger of not completing at the Plantation Course in Kapalua having not yet recovered from shooting pains down his left side which he has felt for the past month, finished a credible second after a fine 69 today.

Brandt Snedeker was two shots further back after also going round in four under par, while last year's Masters champion Bubba Watson and 2011 US PGA winner Keegan Bradley finished joint fourth on nine under. 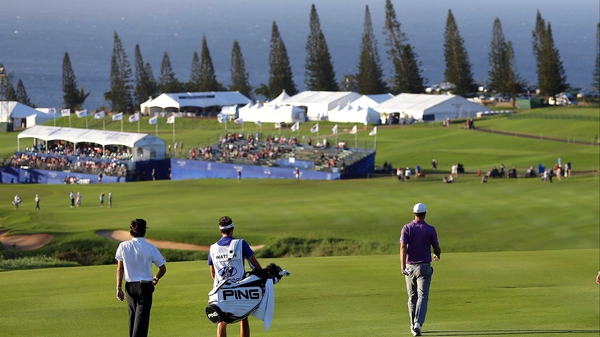